Amount of illicit drugs seized more than doubles compared with 2020

More than seven tonnes of seized drugs were burned or otherwise destroyed at a ceremony in Phnom Penh today as anti-drug trafficking officials announced that the number of illicit drugs seized by police had more than doubled compared to the same period last year. The drugs were confiscated over the course of 2020 as well as the first half of 2021.

In Song, spokesman and deputy director of the Anti-Drug Department at the Interior Ministry, said that the number of drugs confiscated by police has continued to increase year-on-year even throughout the border closures following the COVID-19 outbreak.

Song said that in the first six months of 2021, anti-drug police officials confiscated about 759 kilograms of a range of drugs including methamphetamine, heroin, ketamine and chemical substances used to produce drugs. Over the same period in 2020, police confiscated just 259 kilograms.

“It means that in the first semester of 2021, we confiscated 500kg more drugs than the first semester of 2020, equal to an increase of two times the amount of drugs,” he said. Son added that the seizures related to 3,391 cases and the arrest of 7,246 suspects in the first six months of 2021 compared with 3,131 cases and 6,210 suspects arrested over the same period in 2020. He noted that the amount of drugs seized in 2020 was about three times more than that seized in 2019, but said that he did not have the exact figures on hand.

“Even during the COVID-19 pandemic, suspects still continued trafficking drugs, and they changed their ways of doing it,” he said. Song explained that when police officials restricted and banned land checkpoints, traffickers instead brought their drugs through unofficial checkpoints and over water. In most large drug trafficking cases, he said, the drugs were being smuggled through Cambodia on their way to a third country.

“The reason the amount of drugs has increased is because the drug market has increased, it means that drug users need it more,” he said, adding that this problem was not unique to Cambodia.

Monday’s drug-burning ceremony was presided over by Chuon Sovann, vice chairman of the National Authority for Combating Drugs (NACD) as well as representatives of relevant ministries and institutions. The drug-burning ceremony took place on a plot of land on Street 60 in Phnom Penh’s Meanchey district.

“If the amount of drugs has increased and if we all do not cooperate to counter drug crime, it could impact the whole nation,” Song said. “I appeal to everyone to join together to protect and prevent these crimes from growing stronger and stronger.”

Phnom Penh Municipal Court prosecutor Chroeng Khmao read the report of the number of drugs seized ahead of the burning, saying that they had been brought to the capital from the provincial courts of Svay Rieng, Kampong Chhnang, Prey Veng and Takeo as well as Phnom Penh.

According to the NACD’s report, the drugs to be burned included 291 kilograms of heroin, 5 kilograms of MDMA, 8 kilograms of marijuana, 10 kilograms of carnitine and 626 kilograms of methamphetamine, 41 kg of ketamine, 13 kg of nimetazepam, 2.5 kg of chemical compounds and other chemical substances for a total of 7 tonnes 551 kg of drugs destroyed.

NACD secretary general Meas Vyrith said that the reason for the increase in drug problems was due to Cambodia’s proximity to the Golden Triangle, an area bordering Myanmar, Thailand and Laos that is one of the world’s major opium-producing sites. He said that drug producers were increasingly using new formulas to mass-produce synthetic drugs quickly and cheaply.

Vyrith explained that at the moment, countries including Thailand, Lao, Myanmar, and China are in the first round of countries countering the drug trade, but that second-round countries in the region such as Cambodia and Vietnam had a growing role to play in preventing drug trafficking. He said that by reducing the number of drug users, regional countries could reduce the demand for illicit drugs.

“If we join to make the [drug] user market smaller, the trafficking market will reduce by itself,” he said.

Yong Kim Eng, president of the People Center for Development and Peace, said that this drug problem posed a threat to many people in the society.

“It makes the people, especially youths, lose the opportunity to develop themselves,” he said. Kim Eng added that the growing number of drugs being seized raised serious questions about the effectiveness of officials and police charged with cracking down on drug trafficking.

“If the authorities are not highly effective, it will have a huge impact on society, especially young people who are drug users,” he said. “They have to find and arrest big drug smugglers to be effective — if they just arrest small drug traffickers, it will not be effective.” 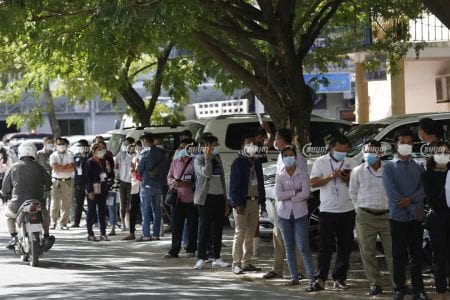