Cambodia’s government spokesperson has said that the nation will ask Indonesian authorities to send back the MT Strovolos oil tanker, which has been charged with stealing roughly 300,000 barrels of crude oil from Cambodia’s Apsara field in the Gulf of Thailand.

Indonesia’s navy on Wednesday seized a tanker and its crew carrying the crude oil after the Bahamian-flagged MT Strovolos was picked up on July 27 off the coast of Sumatra, according to AFP. The seizure came days after Phnom Penh issued a red notice on Interpol to seize the ship over claims it stole the kingdom’s crude oil, the report said.

The 183-metre (600-foot) tanker, sailing from Thailand to Indonesia’s Batam island, had reportedly turned off its identification system and anchored illegally in the archipelago’s waters. Indonesia’s navy said it was questioning the crew of 13 Indians, three Bangladeshis and three people from Myanmar at its base near Singapore.

Government spokesman Phay Siphan told CamboJA that the Ministry of Foreign Affairs is preparing a request for Indonesia to send back the ship to Cambodia.

“I haven’t received clear information, but normally the issue outside the country is under the Ministry of Foreign Affairs or the [Ministry of Mine and Energy] itself,” he said, “As reported, I know that the ministry is processing the request to Indonesia to send back the ship,” he said.

Cheap Suor has previously told CamboJA that the tanker had been rented by Singapore-traded oil operator KrisEnergy to store the oil extracted from Cambodia’s Apsara oil field. He said that KrisEnergy had failed to pay its debts to the tanker crew since it filed for bankruptcy in June. The Singaporean oil exploration firm announced on June 4 that it was unable to pay its debts and would proceed for liquidation. The announcement came just five months after Cambodia extracted its first crude oil from the Gulf of Thailand.

Prime Minister Hun Sen said on August 1 that KrisEnergy’s bankruptcy marked the failure of the country’s first steps into oil production. He said the crude oil that had been pumped had been secretly taken from Cambodian territory across the border to Thailand.

Hong Vannak, a business researcher at the Royal Academy of Cambodia, said​ it is the responsibility of the Ministry of Foreign Affairs to cooperate with the concerned country to request that the oil be sent back to Cambodia. But the economist claimed that since Cambodia has neither storage facilities nor refineries, the oil should not be transported back to Cambodia due to the cost.

“That is Cambodia’s property and it must be sent back to the country, but the right thing Cambodia should do is to negotiate with Indonesian authorities or relevant parties to help keep the oil and ensure that it is protected and not lost,” he said. “And the government then should find a company to buy the oil without having to spend money to bring it back to Cambodia.”

Vannak said while Cambodia still has a lot of mineral resources, the government needs to be well prepared for the resources’ development.

“This is a lesson learned for Cambodia, and it needs to set up a clear mechanism or agreement on a company’s bankruptcy issue to avoid such a problem in the future,” he said.

However, the operators of the oil tanker MT Strovolos denied allegations that the oil had been loaded illegally and that the ship did not have permission to anchor in Indonesian waters, Reuters reported.

The company said that the MT Strovolos loaded about 300,000 barrels of crude oil on May 21 based on the understanding that the cargo belonged to the charterers, according to the report.

It said the ship’s charterers had defaulted on their payment and terminated its service when the vessel had called at Thailand for crew change and refueling but was unsuccessful, instead heading to Indonesian waters. It was then detained by local authorities.

The government enshrined the Kingdom’s first drop of crude oil at Phnom Penh’s Win-Win Monument on June 9, within a week of KrisEnergy submitting a winding-up petition due to bankruptcy. 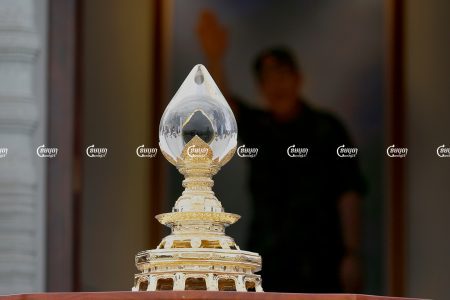 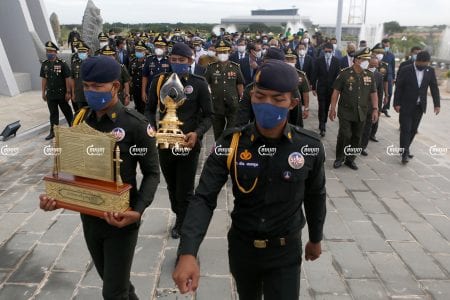 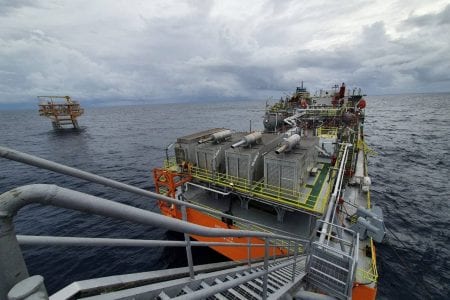