The Labor Ministry changed its instructions regarding COVID-19 testing for workers returning from the Pchum Ben holidays next week, saying they would be asked — but not required — to receive rapid tests before returning to work.

The order also encouraged ministries, institutions, and the private sector — particularly businesses with a large number of staff, as well as educational institutions — to conduct rapid tests to ensure safety.

On Monday, the Labor Ministry issued a similar directive calling for workplaces to offer rapid tests for employees. But the request for testing represented a shift from last week, where the ministry said factory employees must get rapid tests before returning to work and that those who refused could lose their jobs.

The new directive said tests would be voluntary with no penalty for those who refuse.

Last week the prime minister called on officials to scale back rapid testing, with only those who are symptomatic to be tested. In a leaked audio message released Wednesday night, Hun Sen explained to local officials that such testing was unnecessary given the high rate of vaccination. With more than 80 percent of the population having received at least one shot, Cambodia has one of the highest vaccination rates in Asia.

But unionists said they were concerned that a scale-back of testing could lead to outbreaks among garment workers, who throughout the pandemic have faced higher risk of infection due to poor working and living conditions.

“It’s a good to do a rapid test for workers to ensure they don’t bring COVID-19 after return to work from holiday, so if they were found positive, it cannot be spread to others,” said Yang Sophorn, president of the Cambodian Alliance of Trade Union (CATU), adding that factory owners are unlikely to spend the money to provide the tests if they’re not mandatory.

“It’s a bit difficult if some factory excuses themselves from not having enough budget to buy those rapid tests, and workers will normally return to work,” she said. “If they were found positive, we would not prevent it on time, it’s a big danger if it spreads to the whole factory.”

Pav Sina, President of Collective Union of Movement of Worker (CUMW) Cambodia said that during the holiday, people will not only visit their families and relatives, but likely spend time in busy public places.

If it’s only voluntary testing, he said, “workers will not do the test and they will follow each other,” he said. “However, I think employers will be more concerned if their factory has positive cases, then it will negatively impact the production chains.”

He said the Labor Ministry should require rapid tests to ensure safety for workers and employers.

Factory workers said they supported widespread rapid testing and would likely volunteer to do so.

“I don’t mind it if the factory requires us to do a rapid test after coming back from our homelands because I had previously tested it and it’s good to figure out who is positive,” said Pang Sokry, a garment worker in Phnom Penh.

Another garment worker, Phorn Sokna said that if the factory required workers to do a rapid test, she would do so.

“There is still concern about a COVID-19 outbreak but It’s okay to do a rapid test for me because I have tested a few times. I don’t worry about doing a rapid test if we all do it together,” she said.

After the announcement from Hun Sen to stop mass rapid testing, the Ministry of Health reported on Friday a decline in new COVID-19 cases to just 200 cases from more than 900 cases.

On Monday, the ministry reported 219 new cases of COVID-19 and 23 deaths, bringing the total count to 113,475 cases and 2,406 respectively since the pandemic began in early 2020. The ministry has also recorded 104,865 recoveries from the viral disease. 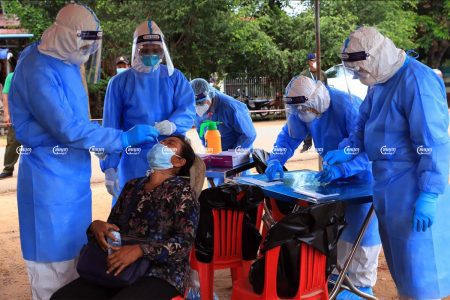