Mu Sochua, the banned opposition party’s vice president, renewed her call for Cambodians in Thailand to “join us” in marching across the border even though she has been blocked from entering Thailand herself.

Sochua was turned away at border control after flying into Bangkok from Kuala Lumpur last week.

She has promised to attempt a return to the country on Nov. 9 alongside other senior leaders who have been living abroad since the Cambodia National Rescue Party (CNRP) was dissolved in 2017.

She maintained in an email on Saturday that they still planned a return through Thailand, though it was unclear how they could get there.

“We continue to appeal to the people to join us in November and still planning to enter through Thailand,” Sochua said. “Democracy in the ASEAN region is at stake.”

Sochua said Thailand had an opportunity to demonstrate to countries in the region and to the world community that democracy and human rights are on Thailand’s agenda.

“Cambodian migrant workers contribute considerably to the economy of Thailand. Unaddressed and prolonged social, economic and political inequalities in Cambodia can recreate a refugee situation as in the 1970s and 80s which Thailand had had to mitigate,” Sochua said.

Thailand, which has experienced successive military coups, has been run since 2014 by former general Prayut Chan-ocha, who has overseen a crackdown on dissent.

Ruling party spokesman Sok Eysan said he was confident the CNRP wouldn’t be allowed through Thailand.

“Thailand has diplomatic relations with Cambodia, not with illegal rebels. Never hope to enter Thailand again,” Eysan said. “If there are people waiting to welcome the rebel leaders on November 9, 2019, they will get no one or a ghost.” 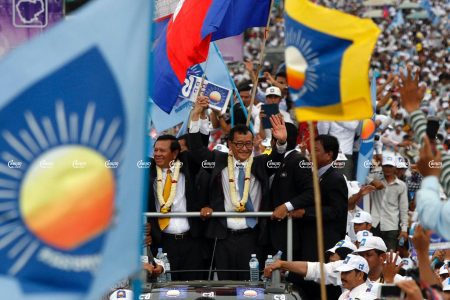