Phnom Penh’s evening curfew was extended by two weeks on Tuesday, a day after the United Nations said new legal measures adopted by the government in response to the COVID-19 pandemic are disproportionate, unwarranted and undermine fundamental human rights.

In a statement Monday, UN special rapporteurs called for the government to review a COVID-19 law introduced in March and condemned the Phnom Penh administration for privacy breaches over the release of details of hundreds of COVID-19 patients.

“We are concerned that the administrative and penal measures, including excessive prison sentences and fines provided in the law, appear to be disproportionate and unwarranted,” it said.

“All measures taken to fight the pandemic, including possible punishments, should be necessary and proportionate and not be used excessively.”

The special rapporteurs also noted the two-week curfew imposed by Phnom Penh authorities on April 1 – and extended Tuesday until April 28 – and its impact on some of the city’s most vulnerable.

“Those who will suffer the most will be individuals working in the informal sector such as tuk-tuk drivers and street vendors,” the experts said.

“The Government should ensure that its economic relief measures target these groups and that people in vulnerable situations are provided with adequate support to cope with the pandemic measures.”

All unnecessary travel is banned in Phnom Penh between 8pm to 5am under the curfew, which now covers the entire Khmer New Year period, and interprovincial travel remains banned until April 20, with the government threatening to use the new penalties adopted last month.

Alcohol sales are also banned in the city and Khmer New Year celebrations are restricted to families gathering in their own homes.

The UN experts called on the government to ensure that all Cambodians, especially those in marginalized and vulnerable situations, have access to goods, services and facilities specific to COVID-19, without discrimination or stigma.

Justice Ministry spokesman Chin Malin said that foreigners would not understand the situation in Cambodia and that the majority of the population supports new laws and measures to prevent the transmission of the virus, which has now claimed 33 lives.

“It does not matter what they have accused, related to measures violating rights and freedoms, individual or international laws, because we have thoroughly considered before laying out the measures,” Mr. Malin said.

According to the international covenant on political and civil rights “they are allowed to restrict some rights,” he said, in adding that developed countries had also implemented COVID-19 laws with more serious penalties than Cambodia, been placed under state of emergency and into complete lockdowns.

Phnom Penh Municipality announced a two-week extension of the curfew on Tuesday, which restricts businesses including restaurants, cafes and bars from having customers on-site between 8pm and 5am. Businesses are, however, allowed to continue delivery services.

City Hall spokesman Met Measpheakdey said that the extension was necessary to curb the pandemic, as Cambodia registered 181 new cases on Tuesday, taking the tally to 4,696, according to the Health Ministry.

“Curfew it is a part of reducing the transmission because we have known that COVID-19 infections come with travelling,” he said. “Right now, COVID-19 is still rising.”

The curfew has also been implemented in part or full in Kampong Thom, Siem Reap, Battambang and Kamong Cham provinces.

“The law was not created to arrest good people, but we will deal with those who committee breaches of the law,” he said.

“It does not restrict the right to freedom of repression; we have the right to expression but they have to follow in line of the law.” 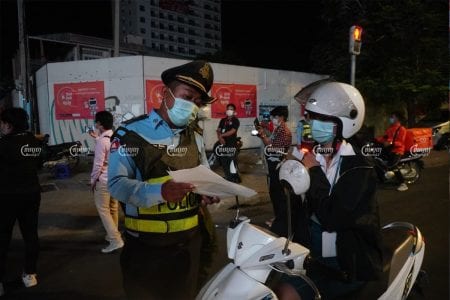