An online news publisher is facing a lawsuit for allegedly broadcasting disinformation related to a land dispute in the Botum Sakor National Park of Koh Kong province.

The legal case against digital journalist Yuon Chhiv has come at the order of National Defense Minister Tea Banh, according to Koh Kong provincial spokesman and deputy Governor Sok Sothy. The spokesman has a personal stake in the legal measure as he was directly criticized by Chhiv in comments the publisher made on Facebook through his media outlet, Koh Kong Hot News, regarding a recent clearance by local authorities of crops and wooden houses on disputed land.

“[Tea Banh] ordered a lawsuit filed because that reporter has broadcasted disinformation and exaggeration intended to disturb social security,” Sothy told CamboJA. “The journalist and some villagers have been encroaching on the national park because we do not exclude that land.”

Forming the context of the dispute is Sub-Decree 30, a government order signed in March by Prime Minister Hun Sen that would remove the protected status of almost 127,000 hectares of land across eight conservation zones. Those zones include Botum Sakor National Park, which lost about 30,000 hectares of protected land to privatization.

Chhiv, 51, claims the disputed land is within that exclusion area and that Sothy and police were wrong to remove villagers who had cultivated it. The deputy governor and the Koh Kong provincial administration deny that claim and allege the journalist is inciting locals to grab land that is still protected as part of the national park. Sothy has also accused the publisher of “ruining his reputation”, as reported by the Khmer Times, and said Chhiv is attacking his honor as a public official.

Chhiv told CamboJA he had not spread any disinformation about the status of land, adding that the site of the alleged encroachment has been cultivated by villagers for about 10 years.

“I have nothing against them because they have filed a lawsuit and I will face the law, but what I have disseminated is true information,” he said.

On September 9 and 19, Chhiv wrote on his publication’s Facebook page that deputy Governor Sokthy had led a police force of roughly 100 officers to destroy villagers’ crops in the Thmar Sar commune of Botum Sakor district. Chhiv also wrote that Sothy and other authorities were refusing to adhere to the sub-decree that excluded land from the national park for private use.

For his part, Chhiv said in 2015 he had bought 22 hectares of land from villagers and cultivated cashew trees on about half of it. When police cleared out the crops and homes, Chhiv added, he lost about 300 cashew trees.

He told CamboJA that 55 local families have revoked their land back to the provincial administration. Chhiv said he and other villagers had met with the provincial governor to address the land issue but were turned away and accused of encroachment.

“I asked them about a sub-decree that the government has excluded land to villagers and they said they didn’t know, so I decided to broadcast information gradually,” Chhiv said. “I am really worried about facing the court, but I will accept it because I saw [the demolitions] with my own eye.”

Sub-Decree 30 has been explained by the government as a measure to redistribute land to villagers and other locals who had previously inhabited it but had lost their rights to do so when the territory was placed under protected status. However, outside observers say powerful figures connected to the government are the main benefactors of the privatization move, not local smallholders.

But even before the sub-decree went out, Botum Sakor National Park was long-divided by official concessions, including for major plantations and other development projects. Some smallholders have also been cultivating without concessions on land within the national park and may now believe the exclusion process applies to them. Though the provincial administration is called upon by the sub-decree to clearly delineate affected areas, it does not yet appear it has done so.

Still, in the case involving Chhiv, deputy Governor Sothy says provincial authorities have repeatedly told villagers not to occupy the land in question.

Farmer Try Touch, 60, was also cultivating that land and was similarly affected by the demolitions. Touch says his family has since 2007 grown cashew trees on about 12 hectares in Thmar Sar commune’s Chamlorng Kor village. In January, provincial authorities put a stop to that by destroying his trees.

“They have banned us from cultivating on that land, which they have claimed is in a protected area,” Touch said. “I am pained because Samdech Hun Sen has excluded the land to villagers, and now they did this.”

Ith Sothoeuth, acting executive director of the Cambodian Center for Independent Media, said that since the case against Chhiv involves the work of a journalist, the relevant parties should carefully consider free press considerations before taking the matter to court.

“There are some factors that misrepresent the news, so suing a journalist leads to a picture that threatens other journalists,” he said.

Sothoeuth further called on the relevant authorities to disseminate true and reliable information to the public to counter untrue narratives.

Him Khortieth, CamboJA’s research and advocacy manager, said he will monitor Chhiv’s case closely, saying that the use of the judiciary to sue journalists for exercising their rights to disseminate information to the public is seen as chilling free expression.

“I think it is an act that restricts the freedom of the press and threatens the journalist to lose his temper and not continue his work,” Khortieth said.

He added that, according to the Law on the Press, if a journalist publishes information that is inaccurate or misleading, the subject of reporting has the right to request the press unit to revise the article or, for major errors, make a public apology. Defense Minister Tea Banh could not be reached for comment.

Chinese-language editor to be deported over “fake news” vaccine sales 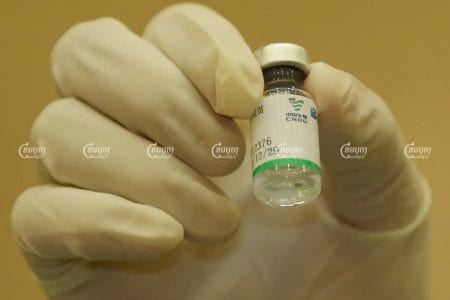