A former Social Affairs Ministry secretary of state and his nephew were sentenced to 15 years in prison for the illegal trafficking of two Cambodian maids to Saudi Arabia.

Presiding Judge Koy Sao issued the sentences on Tuesday against Ahmad Yahya, the former secretary of state, and his nephew Ismael Pin Osman, 44, a former Transport Ministry official, under Article 11 of the Anti-Human Trafficking Law.

The charge, unlawful removal for cross-border removal, relates to the trafficking of minors or trafficking by means of force, threat, deception, abuse of power or enticement.

Eng Pov, one of the two victims, attended the court hearing and told reporters she had been made to work “like a slave” for 14 years in Saudi Arabia, mostly without pay.

“I am very happy as the court has found the truth and justice for me,” Pov said. “I was waiting for this justice for more than 10 years.”

Through Yahya’s company Accent Group, nearly 300 Cambodian women had migrated to Saudi Arabia between 2004 and 2017, Sao said. Some were underage and sold to Saudi employers for a fee of $20,000, he said.

Osman was arrested on February 11 last year and put in pretrial detention, while Yahya was charged but remained free on bail until his sentencing yesterday.

“The court orders the arrest of Ahmad Yahya immediately and to take him, alongside the accused Ismael Pin, to serve his jail term in Prey Sar prison,” Sao said.

During the hearing, both defendants denied the human trafficking allegations, saying they were unaware of the exploitation of Cambodian migrants in Saudi Arabia.

Yahya accepted that his company had recruited nearly 300 Cambodian women, including the two plaintiffs, to travel to Saudi Arabia.

However, “I did not sell them to work as maids in Saudi Arabia. I also did not know that they were forced to work hard by the owners of the houses without payment, and did not allow them to eat enough,” Yahya said.

“I did not commit anything as the court has accused me. I would like to ask the court to find the truth and justice for me,” he said.

Osman said he did not know the two plaintiffs.

“At that time, I was an official working with the Ministry of Public Works and Transportation. I was very busy with government work and did not have any free time to bring them to Saudi Arabia in 2004, so they have accused me unreliably,” he said.

Pov told reporters that Osman had introduced her to Yahya in 2004 with the opportunity of employment abroad. She trusted Osman because Yahya was a prominent politician, and accepted an offer to work as a maid in Saudi Arabia for $120 a month.

A week later, she traveled from her home in Kampong Cham province to meet Yahya and stay at his house in Phnom Penh’s Russei Keo district for a month, learning Arabic and housekeeping ahead of her trip, she said.

Osman had taken her, along with a group of other women, to the Interior Ministry to apply for passports, with Yahya paying all expenses related to the passport, visa and other travel costs.

She traveled by bus to Bangkok with Osman in 2004 before flying to Saudi Arabia, she said.

“When I first arrived in Saudi Arabia, I was sold to work as maid with a rich Saudi Arabian family,” she said. “During my stay with this first Saudi family, they paid me the salary of $120 a month but they forced me to work very hard — almost 24 hours like a slave every day,” she said.

After seven months, the family sold her to another Saudi family for $20,000, she said.

In January last year, she finally fled the house when the family was asleep and sought help from Saudi police. She was expatriated a month later, she said.

After arriving home, she filed her complaint against Osman and Yahya to the Interior Ministry, she said. 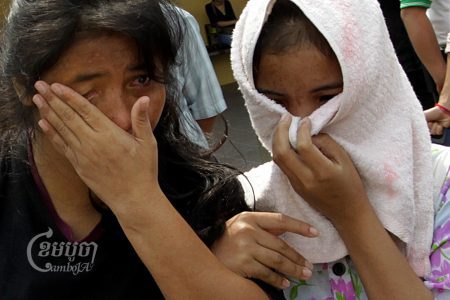