Three out of four vice-presidents and other members of the Funcinpec Party have requested the return of the party’s official seal as well as the seal of the party’s president from Princess Norodom Marie, ex-wife of party leader Prince Ranariddh, claiming that the seals have been used by non-party members without the approval of the party leadership.

Now-former Funcinpec spokesperson Phan Sithy said in a press conference on September 22 that he and some other party members had asked Ranariddh’s ex-wife for the seals back after having entrusted her with them after the prince was sent to France for medical treatment in 2019. The press conference came on the same day as Sithy was removed from his position as party spokesperson by the party’s new spokesperson Nhoeurn Raden.

Prince Norodom Ranariddh was injured in a traffic accident in Preah Sihanouk province in 2018 when a taxi-car crashed into his vehicle. His wife Ouk Phalla was killed in the crash.

Sithy claimed that the appointment of some provincial and district-level executive directors had been carried out without the approval of the party’s three vice-presidents. He alleged that Marie’s personal assistant Heng Haklim was involved in the seals’ continued use along with the prince’s ex-wife.

The former spokesperson also said that on August 6, he and a number of other members had asked Funcinpec Party vice-president and Ranariddh’s younger half-brother Chap Nhalivuth to visit the prince, but that Nhalivuth had not been allowed to meet with him.

Heng Haklim told CamboJA on Thursday that he and Princess Marie are not involved with the seals’ continued use.

“If they want seals, they should send the letter to ask from Samdech Krom Preah [Prince Norodom Ranariddh] and they asked seals from Princess [Norodom Marie] is not correct because she is not involved with the party.”

Funcipec’s new spokesperson Nhoeurn Raden said that the party seals belonged to Prince Ranariddh, and that he had the right to provide them to any person whom he trusted.

“Princess Norodom Marie is not involved with the Party, so they should send the letter to the party’s president Prince Norodom Ranariddh because he still has life and he has normal health and he is staying in France,” he said.

He alleged that Sithy and his allies were not satisfied with appointments made by Ranariddh’s eldest son Prince Norodom Chakravuth in his capacity as vice-president in December 2020. Raden accused Sithy as well as Say Hak, Heng Chantha and Chap Nhalivuth of having held an extraordinary meeting of the Committee of Directors on September 17.

He added that in regard to all decisions or appointment of officials, the party’s committee does not decide by themselves but just proposes suggestions to the party president.

Sithy said that princess Norodom Marie was appointed as cabinet chief of Funcinpec Party’s president in 2019 by acting party president Prince Norodom Chakravuth but that this appointment was not correct because Prince Chakravuth had not been appointed legally, as the Interior Ministry issued a statement at the time saying that the decision had not been made based on the party’s own internal rules and criteria.

He said that he had already sent information regarding the seals to the Interior Ministry.

“If she [Princess Norodom Marie] does not provide the seals, we will arrange the procedure based on the law of the Kingdom of Cambodia,” he said.

Sithy said that Funcinpec will hold a congress soon, and that they will invite Ranariddh to return from France to once again lead the party.

“We need to reform the party to restore the party again,” he said. “Our goal is that first, we want to arrange to have regularity in the party and second, we must eliminate all people who have no position that lead this party because it is not correct.”

He added that according to a letter signed by Prince Norodom Ranariddh in 2019, the prince had asked the party leaders to merge Funcinpec with the Khmer National United Party.

“We will merge with each other, so our voice will increase because we will have more members to join with us,” he said.

Raden said that Ranariddh will hold a video conference with his officials about preparing candidates for the 2022  commune elections and 2023 national election as well as to discuss other policies around 5PM on Friday.

“[Prince Ranariddh] has a plan to return to Cambodia any time before the commune elections,” he said.

He said that Prince Norodom Ranariddh will speak about the merging of Funcinpec with the Khmer National United Party when he returns to Cambodia.

Military general Nhek Bun Chhay broke away from the royalist Funcinpec political party in 2016 to form the Khmer Nation United Party. He was arrested in 2017 in relation to a 2012 drug bust and charged with conspiring to produce drugs. He was released on bail in April 2018.

Bun Chhay said that starting in 2019, both parties have negotiated and agreed to merge, but they will still use the Funcinpec Party’s name in the upcoming elections.

“The unity between both parties was barred by one or two people for a long time,” Bun Chhay said. He added that Funcinpec had asked him to delay the merger due to internal issues within the party.

“Until now, we agreed with each other and we will wait to hold the congress to unite,” he said. He confirmed that Ranariddh will remain party president after the merger.

Pa Chanroeun, analyst and president of the Cambodian Institute for Democracy (CID), said that the parties seemed to be working hard to solve their long-running internal conflicts.

“As I am a citizen, I congratulate them about their unity, but I cannot estimate the result after they are united,” he said.

Chanroeun said that based on both parties’ performance in the last elections, he was not optimistic about their future.

“In Cambodia, beside the ruling party and Cambodian National Rescue party, it is difficult to find any parties which last for a long time,” he said. “Even the Funcinpec Party, which was the party that won in 1993, it lost popularity from the people until it did not receive [National Assembly] seats in the election.” 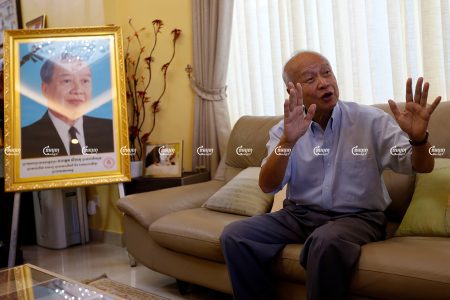 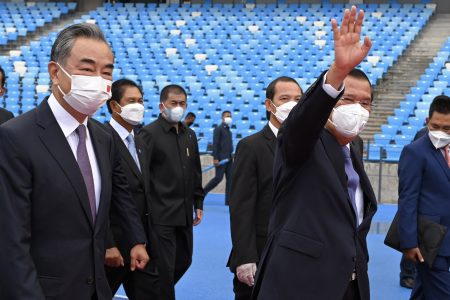