A new program to provide information and advice via phone to farmers has found few takers, with some saying they have little faith in the government to help them find solutions to their most pressing problems.

In a statement issued August 19, the Ministry of Agriculture Forestry and Fisheries said farmers could now reach out directly to 12 different departments, in order to receive support on new farming technologies, market access, and animal health, among others.

The program was rolled out after Thailand banned longan imports from Cambodia — the knock-on effect of an import ban China issued to Thailand. Prime Minister Hun Sen then announced the government would purchase the fruit at the same price — but the incident underscored how Cambodian farmers have struggled with market access amid the pandemic.

It is not clear how the helpline is being advertised and several farmers interviewed across the country said they had not heard of the new program.

Tay Song, 34 a vegetable farmer in Sa’ang district, Kandal said that in the past he called similar government helplines to get assistance when he had a market problem, but no one ever picked up.

“I don’t really trust that the authorities can help us. If they want to help, it’ll be effective, and farmers will appreciate it but I am afraid they just do it for reputation then ignore us,” he said.

“If there is no market and they can find one for us, it would be really great for farmers … because a lot of farmers face challenges with this,” he added.

Chea Moeung, president of Prasre community in Prey Veng’s Ba Phnom District, said that if they could truly provide help, access to experts would be a big boon for farmers in his community, who have long faced challenges.

“No one hears and helps us,” he said. “Farmers are forced to sell when they grow even at a lower price because [our crops] will be damaged if we store them,”

Srun Phearum, a farmer at Battambang province who grows rice and mangoes said he had struggled with fluctuating market prices.

“For farming techniques, I can handle it, but I always have a problem when collecting the crop to sell. The market is changeable, that’s hard for me, so I have to sell it even at a cheap price,” he said.

His chief challenges, he said, demanded concrete solutions, not advice: There is limited water supply in his area and farmers sometimes struggle to pay for seed rice. But in spite of these difficulties he has never considered reaching out to authorities for advice as he lived in a remote area and simply relied on himself.

Authorities hope that attitude will change with time.

Mao Minea, Director of the Department of Agricultural Extension at the Ministry of Agriculture said that the aim of the call line program is to respond to farmers’ problems.

“We have 25 provincial call centers to give information and technical support at no cost to farmers. If they call us in the evening, there is a recording system, so we will respond to them during working hours.

“We have all skills including aquaculture, animal care, and vegetable growth to respond to them. We also make stickers to spread information to local people as well.”

Tan Phannara, Director General of the Animal Health and Production Department said the Agriculture Ministry worked hard to ensure those staffing the helpline had access to useful information.

“If there are some calls from citizens to ask about animal issues, we also give them solutions. If the farmers have problems, call us, we’ll try to help them,” he said.

Phannara refused to say how many people had called since the launch, saying if he had to count callers he couldn’t do his job. But it is clear that calls to some departments remain few.

Kong Pheach, Director of the Department of Agro-Industry, said that farmers are still learning how the program works and that his department hadn’t yet received any calls.

“I believe until now there are some farmers who call different departments like if they are curious about fisheries or vegetables, they will call that department. If they are asking about the wrong subject, the staff will tell them the right department to reach, but mine has not yet [received calls like that],” he said.

Pheach said he expected most calls to involve market issues as Covid-19 had seriously impacted both domestic and foreign markets.

“We will try our best to solve farmer’s concerns, but we need to accept that the Covid-19 impact causes the market’s fluctuation,” he said.

“I cannot conclude how effective this strategy is. Let’s wait for real practice. This strategy will only help to give information to farmers and vendors but they should prepare some budget or team to help farmers when there is a lack of market and droughts,” he said.

Meng Sakuseth, Cambodia program officer for the International Fund for Agricultural Development, said because of COVID-19 restrictions, it’s become more difficult for authorities to hold in-person training sessions. The helpline, he said, is a legitimate way to pass advice to farmers.

“This strategy is not aimed at improving [the government’s] reputation but at solving farmers’ problems.” He said, “It’s not about reputation, it’s about help.” 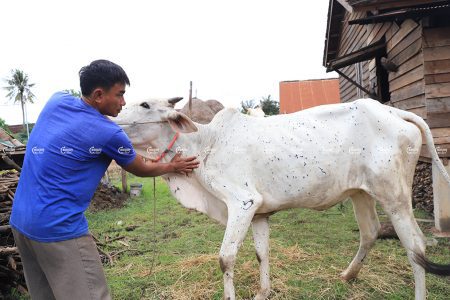