An Information Ministry advisor was fired from his position, and a journalist association and Facebook news page he runs had their licenses revoked after he posted a picture of a packaged golf kit which he mistook for the first person to die from COVID-19.

Prum San posted an article about Cambodia’s first on March 11 about the death of Cambodia’s first COVID-19 patient in Phnom Penh. He posted the information to his personal Facebook page but attached a photo of a golf kit wrapped in white packaging, very loosely resembling a human form.

Speaking to CamboJA, San said he accidentally posted the photo and after he realized it was a packaged golf kit he took it down within ten minutes but Facebook users had already taken screenshots and posted it on the social media platform.

San said his wife, Sy Sopheak, ran San Prum News and he was only an advisor to the social media news outlet. He said the closure of San Prum News would affect around 60 staffers and apologized for his mistake.

“I regret this mistake because it was an unintentional mistake,” San said.

He was a supporter of the government and had helped translate Thai-language information for the Interior and Defense Ministries, especially during the Preah Vihear conflict with Thailand.

“Please, all leaders allow this outlet to operate again and I vow that I will correct all my mistakes,” he said.

Meas Sophorn, an Information Ministry spokesperson, said San Prum had fabricated the truth by posting an incorrect photograph and could have caused chaos and affected national security. He said Prum San had been warned in the past.

“He distorted information about the death of the COVID-19 patient,” Sophorn said. “It affects the reputation and efforts of the authorities, especially the Health Ministry.”

He said outlets needed to be careful about the information they post to avoid “chaos” and that five outlets had their licenses revoked so far – two last year and three this year.

One of these publications was Angkor Today, a WeChat-based, Chinese-language publication, which reported that Chinese nationals were receiving text messages promising them COVID-19 vaccine shots for $120. Even the Chinese Embassy in Phnom Penh warned its citizens about these text messages.

But, the government revoked Angkor Today’s license and deported and banned the re-entry of its publisher, Shen Kaidong. The government also issued a new directive allowing for similar measures against foreigners who flout COVID-19 rules and restrictions.

The government also hurriedly passed a law to tackle COVID-19 and infectious diseases that places heavy penalties and prison sentences on people who violate any COVID-19 health measures.

Reth Sarun, a reporter of San Prum News, said he worked there since it was established two years ago and was disappointed it was shuttered. He said another popular Facebook account, run by Pheng Vannak, criticized the incorrect photo and brought it more attention.

“I think that when it affects [Prum San], it also affects about 60 staffs,” Sarun said. “I request the information minister to please forgive San Prum News because it is an unintentional mistake.”

Press advocates and rights groups have criticized the government for rushing to use the penal code provisions against journalists rather than use the Law on the Press and use its provisions to request corrections. Normally, news publications will publish corrections when the public or a relevant institution points out an error.

Ith Sothoeuth, media director at the Cambodian Center for Independent Media, said the incident seemed to be an unintentional mistake by Prum San and that the ministry should have used the Law on the Press, rather than revoke the license.

“If a journalist has made a mistake in the dissemination of news, the ministry should ask them for a correction or the ministry could require him to apologize rather than end their license or work positions,” Sothoeuth said.

Khieu Kola, a spokesperson for the government-friendly Club of Cambodian Journalists, said that Prum San was not a member of their group and did not want to comment on his case, but then said San was at fault.

“I think what he did was wrong completely,” Kola said. 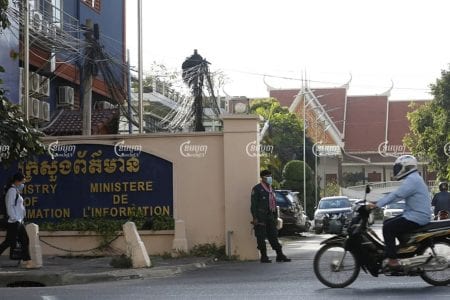