Rainsy returns to France as supporters released from prison

Cambodia National Rescue Party (CNRP) co-founder Sam Rainsy said on Saturday that he had returned to France, one week after his promised return to Cambodia saw him diverted to Malaysia and Indonesia for a series of meetings with parliamentarians.

Rainsy and other senior leaders of the CNRP had vowed to walk across the border from Thailand alongside thousands of supporters on Nov. 9, ushering in a “people power” movement to establish democratic competition.

The ruling party had labeled the planned return a coup attempt and arrested dozens of supporters in the lead up. In the end, however, Rainsy — who at one point said he was prepared to sacrifice his life in the homecoming — did not even make it to Thailand.

Before returning to France, Rainsy made trips to Malaysia, Indonesia and Singapore and said he was working through diplomatic channels to find another way for the CNRP leadership to return to Cambodia in the near future in a peaceful manner.

Rainsy has lived in France since 2015, and has broken repeated promises to return to the country.

After Rainsy’s Nov. 9 homecoming failed, party co-founder Kem Sokha was freed from de facto house arrest in Phnom Penh and some of the arrested CNRP supporters released on bail. Prime Minister Hun Sen said that all of them should be granted bail.

The EU, which is reviewing Cambodia’s access to duty-free trade due to political and human rights concerns, also submitted its preliminary report on the possible suspension of the “Everything But Arms” (EBA) scheme on Tuesday.

The bloc demanded “real and credible” improvement if Cambodia wanted the deal to remain intact.

Hun Sen, however, denied that the release of Sokha and the CNRP supporters was linked to international pressure.

He also warned that the CNRP, which was dissolved in November 2017, should not attempt to regroup again.

“Those people who have not been tried yet must be careful. Don’t do any activities,” Hun Sen said at the groundbreaking for a new road in Preah Sihanouk province on Saturday. “If you do, you must be gathered up again. Don’t talk about international pressure.”

Meanwhile, following the easing of his judicial supervision, Sokha spent last week meeting various diplomats at his home. Sokha was arrested in September 2017 for allegedly working with foreign powers to overthrow the government. 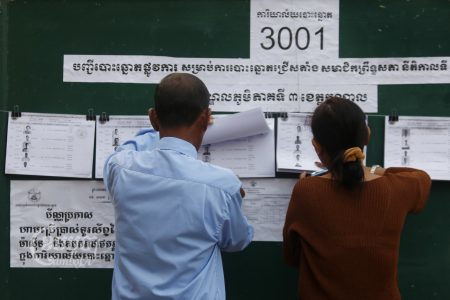