Two activists from the outlawed opposition CNRP were charged and sent to pre-trial detention on Monday over Facebook posts criticizing the government’s roll-out of the Covid-19 vaccine, officials said.

May Sophon and Thon Chantha were arrested in Phnom Penh last week and sent to Prey Sar prison on Monday for inciting chaos and insulting the government, officials said, as a widely condemned crackdown on “fake news” continues.

“They are also involved in the rebel group,” he added, referring to the CNRP, which has seen scores of its members jailed, beaten, exiled and charged with crimes since the party was outlawed in 2017.

Sophon and Chantha were charged for incitement to commit a felony and insulting government leaders by the Phnom Penh Municipal Court on Monday, court spokesman Y Rin told CamboJA.

They face up to two years in prison.

The government of Prime Minister Hun Sen has been criticized for using the Covid-19 pandemic as pretense to crack down on opposition figures, with the rollout in February of Sinopharm vaccines giving rise to a new round of critique.

In a February 18 Facebook post, Chantha decried the government for allowing China to use Cambodians as “animals for experiment” in reference to the donation of the Sinopharm vaccine, which does not have WHO approval.

He also shared a post from another user claiming that three people had died after injecting the vaccine.

On February 12, Sophon asked why Cambodians were being pushed to be vaccinated, when there have been relatively few infections and no deaths in the country.

“I consider that it is politically motivated,” she wrote, adding that Prime Minister Hun Sen was pandering to China and diverting attention from the current political crisis at the same time.

The arrests come after Chinese journalist Shen Kaidong was deported last week over a story claiming that China-donated vaccines were being sold improperly out of Calmette hospital.

Campaigners have noted a decline in the space for free speech under the ongoing campaign of arrests, but police spokesman San Sokseiha said that the latest charges were warranted.

“It isn’t a restriction of freedom of expression. Do you see other countries with the freedom to post like Cambodia?” he said, adding that the two had intended to cause social unrest.

Meach Sovannara, who spent three years in Prey Sar prison in connection with the CNRP’s so-called attempted insurrection in 2014, confirmed that the two arrested were party activists and called for others to show extra caution in social media posts.

“[The government] continue to break our political spirit. They do not want to hear the opposition because it is dangerous to the ruling party,” he said.

Am Sam Ath, deputy director at rights group Licadho, said that freedom of expression was becoming an increasingly pressing issue, particularly with the government set to introduce a national Internet gateway next year.

“We have seen a lot of arrests related to exercising freedom of expression online,” he said, calling for the government to show restraint and correct “fake news” rather than arrest people who may not be aware of its legitimacy.

“The challenge with freedom of expression is related to a lack of information,” he said. 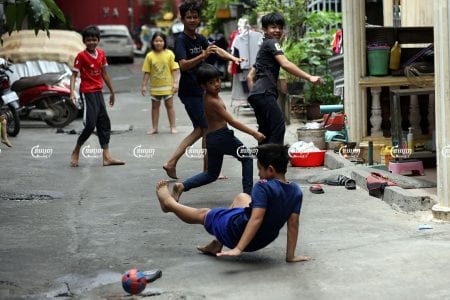