Two Japanese men admitted in court on Monday to killing a taxi driver in a botched armed robbery in Siem Reap province, but said they only wanted his car and had no intention of killing him.

In the Siem Reap Provincial Court, Ishida Reimon and Nakakuki Ryuji, both 24, bowed in apology to the victim’s wife as they answered questions about the crime.

Nakakuki said he had debts in Japan and planned to steal a car in Cambodia to make some quick cash.

“I did it because I wanted that car for myself,” Nakakuki said. “I didn’t intend to kill him, but I accidentally used excessive force.”

According to police, the two men arrived in Thailand on March 12 and crossed the land border into Cambodia four days later.

On March 17, they hired Hoem Chan, 41, to drive them around tourists sites around Siem Reap, including the Angkor Archaeological Park, after scouting out his SUV as a target.

Around 5 p.m., they asked Chan to drive them to a market in Pouk district, police said.

On Monday, Nakakuki told the court that they had asked Chan to stop on the side of the road so they could urinate.

“I took my knife from my bag and I pointed it at the victim’s neck to order him to give the car to me,” Nakakuki said. Ishida was outside the car at the time, he said.

According to police, Nakakuki slashed Chan’s neck during a scuffle, killing him. The two Japanese men dumped Chan’s body on the side of the road before driving off.

However, Ishida quickly crashed into a truck and then a power pole. They were arrested as they attempted to flee the scene on foot.

“I knew it was illegal but I wanted some money too,” Ishida said.

Nakakuki had earned about 250,000 yen (about $2,300) a month in Japan as a construction worker, while Ishida made about 210,000 yen ($1,900) a month at a transport company, they told the court. Nakakuki said he had completed high school in Japan, and denied having ever suffered from mental illness.

Deputy prosecutor Chuon Sok Panha argued for premeditated murder, saying Nakakuki had carried a knife in his bag and their plans had been carefully discussed ahead of time.

Defense lawyer Theng Chamroeun, however, said there was no intent to kill, and argued for unintentional homicide.

Unintentional homicide carries a potential jail term of one to three years, murder 10 to 15 years, and premeditated murder with life imprisonment.

Sok Chanroeun, the taxi driver’s wife, asked the court for $100,000 in compensation.

“Please, punish them in accordance with the law,” she said. “I think they had the intent to rob and kill my husband because they had discussed [the crime] with each other.”

Two people who were on the truck struck during the attempted getaway also demanded $5,000 each in compensation.

Presiding Judge Um Chanthol said the verdict would be announced at the next hearing, though he did not schedule a date.

About 30 people observed the two-hour hearing, including a large number of Japanese journalists as well as two officials from the Japanese Consulate in Siem Reap. 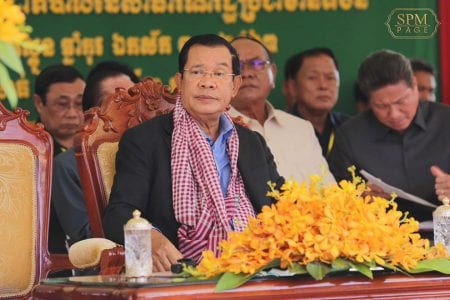