Twenty-four garment factory workers were killed on the roads in the first half of the year and nearly 1,000 injured — an issue that should be tackled with as much attention as given to annual minimum wage increases, workers, unions and employers said.

On July 2, with 43 workers crammed into a minivan, her leg was crushed when her ride crashed into a truck.

Four weeks later, her leg still swollen, Lang was knocked unconscious in a second crash and needed stitches on her scalp. She hurt her neck, broke her shoulder and still cannot dress herself.

Sixteen workers on the van were seriously injured, she said. One suffered blood clots in the brain.

“She lost her memory and can’t remember anyone,” Lang said. The worker remains under treatment at Calmette Hospital more than a month later.

“It shocked me,” Lang said. “After this accident I won’t commute by van to work again.”

Ran Rin, 32, can no longer work after three years at the Horizon Outdoor factory in Kampong Chhnang province.

On April 4, she stood surrounded by 17 other workers on the back of a flatbed truck that was equipped with bars to hold for balance. Rin and some others had their arms around the bars when the vehicle struck a truck carrying construction supplies.

“I didn’t see what our truck hit as I standing in the middle and couldn’t see out the back or the front,” she said.

The impact mangled the workers’ arms. Rin and four others needed amputations.

Five months later, Rin has a modest request for the industry: seats on the trucks and vans used by workers for their commutes.

Statistics issued by the National Social Security Fund (NSSF) have recorded a small rise in traffic-related deaths and injuries for garment factory workers this year.

In the first 6 months of 2019, 24 garment workers were killed and 944 injured, up from 16 deaths and 882 injured in the same period of time last year, according to a July NSSF report.

William Conklin, country director of labor NGO Solidarity Center, said it was a serious problem that needed to be tackled urgently.

“From a union’s standpoint we have to confront [the issue] and find a solution,” he said. “Employers can also be part of the solution as well as the brands — [responsibility] does not end at the factory door.”

The industry had made great strides in other areas — notably increasing minimum wages over the past 10 years — and the deadly commutes could also be stamped out if there was the will, Conklin said.

At a conference on Sept. 16 about improving worker commutes, organized by the Asia Injury Prevention Foundation, deputy Phnom Penh traffic police chief Luy Chhin said the trucks transporting workers were illegal since they were made to carry goods, not passengers.

“However, we don’t have any other option” than to close their eyes and allow them for now, Chhin said, adding that drivers had already bought the trucks, which, unlike buses and minivans, could reach villages during the rainy season.

Garment Manufacturers Association in Cambodia secretary-general Ken Loo said the problem needed cooperation from all parties to solve, since simply raising transport allowances for workers — currently set at $7 a month — would not be enough.

“They’ve asked to be provided a higher food allowance, but the workers don’t buy better food. It’s the same with the transportation allowance. They’ve asked for more money, but don’t choose better transport and use the money for other purposes,” Loo said. 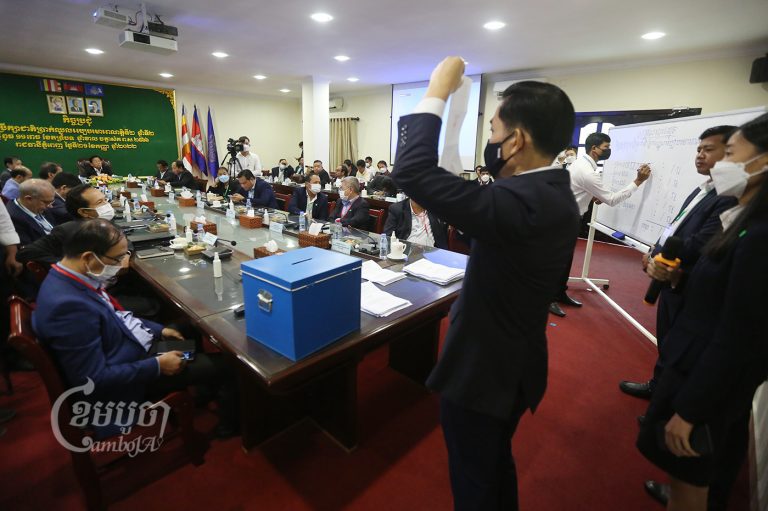