Asbestos was discovered in baby powder, raising health concerns among parents and consumers

A government investigation announced a recall on 12 brands of talcum powder sold in Cambodia after finding them to contain traces of asbestos — a mineral carcinogen that can be extremely harmful to human health.

Koch Srey Soung, 25, has been using Babi mild powder since her baby was born two years ago and expressed concern after learning that the powder contained potentially harmful substances linked to cancer.

“I felt nervous for my child after receiving that news. I fear it will affect my child’s health because I have used it for almost two years,” she said.

Noting that all brands of baby powder have been on the market for many years, she asked why the CCF was only now carrying out an investigation rather than insuring products were safe prior to import.

“The people depend on the ministry, if they allow it to be imported it means that it has been properly inspected. They seemed to be negligent in inspecting imported products,” she said.

She also urged companies to take greater responsibility to ensure their products were safe for consumers.

Johnson & Johnson has faced thousands of lawsuits internationally with plaintiffs alleging their cancers were linked to asbestos found in baby powder. Talc is often found nearby asbestos, and trace amounts of asbestos are sometimes mined alongside the consumer product. In 2019, the US Food and Drug Administration (FDA) advised consumers to stop using affected Johnson’s baby powder products and a year later the company announced it would no longer sell talcum powder in the US. Earlier this month, the company announced it would stop international sales too in 2023.

Although these powders are marketed for babies and children, many adults and the elderly use them regularly.

Sreyleak, 21, has been using Bhaesaj cool powder for about seven years and expressed concern about the side effects.

“I use this powder with my family. I’m afraid it will not hurt now, but it will affect me in the future,” she said.

Similar to Soung, Sreyleak questioned why the investigation was only now being carried out.

“I want the national level to have strict restrictions on products imported from abroad. When manufacturing something, there must be a technician to check it properly,” she said.

CCF’s Director General Phan Oun said the powder contained asbestos. Though asbestos can cause cancer, he noted that it’s more often caused through prolonged exposure — such as in the case of workers who inhale it regularly.

But baby powder consumers may have heightened exposure after using the powder for five years or more, he said.

He said Cambodia had only now conducted its own research on these brands after receiving information recently from the US FDA.

“This case has been happening for a long time, but I have just gathered all the information and have to take action accordingly,” he said.

He told CamboJA that as to the question of whether products had been imported without proper inspection, it was not his jurisdiction. But he said the findings meant a recall would go into effect immediately.

“All baby powders that may contain asbestos have been ordered to be recalled from the market by importers and distributors,” he said.

According to the statement released by CCF, the importing businesses, distributors, and other relevant parties will have until September 5 to cooperate in bringing in their stock of the listed products for additional analysis in a third-party laboratory with internationally renowned capabilities. 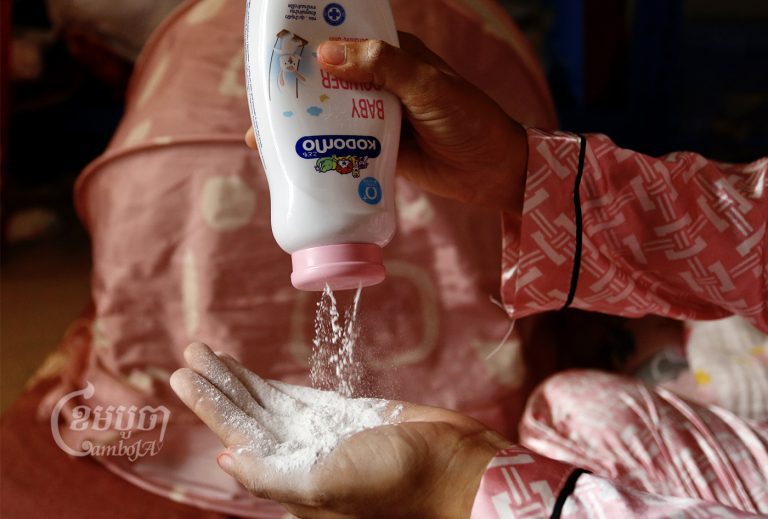