The Preah Vihear provincial court on Thursday sentenced eight small-time journalists to prison after convicting them of extorting the owners of a timber warehouse in June.

The journalists were arrested shortly after the owner of the warehouse reported the group had been taking photographs without permission in a private area of the warehouse.

Kim Samleng, the provincial court’s deputy prosecutor, told CamboJA that seven of the journalists were sentenced to two years in prison but will serve a term of only four months and 20 days, with the rest of their sentence suspended. Those journalists are: Kim Hean, 42, Vong Nimol, 41, Kim Hong, 40, Roeung Chhon, 40, Sam Saroeun, 49, Soeung Sophy, 42, and Chhay Leav, 51. The eighth journalist, Chea Samon, 39, was sentenced 2.6 years but served only eight days of that sentence and has already been released on bail, similarly with the rest of his sentence suspended.

Samleng said Samon was released early because his wife died, reportedly after having a heart attack when she heard her husband had been jailed.

The deputy prosecutor said the convicted journalists had demanded money from warehouse owner Him Chhenghean, 37, in quantities of $100-150 each. Chhenghean had told them that he could provide only about $25 each, which they did not accept.

The group was arrested June 4 and, unless something changes, the seven who served longer sentences will be released October 22.

Noun Phanith, the lawyer representing four among eight journalists, said that even though the court gave his clients the minimum sentence, they still had faced injustice as there was insufficient evidence to convict them of extortion.

Phanith urged journalists to practice ethically and adhere to the national Law on the Press to avoid straying into potentially illegal territory.

Hem Sokunpisey, director of the Preah Vihear Provincial Information Department, said she couldn’t comment on the case. She also drew issue with the fact the journalists had entered the province without informing her, which is not required in Cambodia.

“According to my idea, I think that journalists who go to collect information in any province should let the provincial information department know, because when they have a problem, [we] do not know,” Sokunpisey said.

Nop Vy, executive director of the Cambodian Journalists Alliance Association (CamboJA), said that, in general, courts should clearly investigate where journalists go to find information before they sentence them for wrongdoing.

“Regarding the role and activities of journalists, the court still used the criminal code to sentence them,” he said, adding that such applications of criminal penalties may affect the profession as a whole.

Ith Sothoeuth, acting executive director of the Cambodian Center for Independent Media, also said that prosecution of journalists while they are on duty can threaten press freedom. As for the offense of taking private photos without permission, Sothoeuth said if the warehouse had been used for criminal activity, asking to take photos ahead of time could give a perpetrator an opportunity to commit further offenses.

“I think the length of their detention is intended to intimidate journalists from continuing to perform their duties [such as] monitoring inactivity and other crimes,” he said.

Meas Sophorn, spokesman for the Ministry of Information, denied that the court’s decision to charge the perpetrators posed a restriction on press freedom.

“Those who break the law are held accountable before the law,” he said, rejecting that freedom of expression was a factor in the case.

CamboJA released its latest quarterly report Tuesday covering the period from July-September, during which the organization observed incidents affecting a total of 21 journalists.

The quarterly report also noted that digital press freedom has been curtailed amid the pandemic, as evidenced by the sharp increase in the number of ‘fake news’ accusations, revoked media licenses, threats and arrests that took place this year related to COVID-19. (Additional reporting by Chea Sokny) 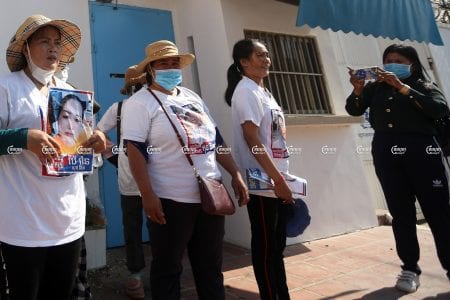