While top Candlelight leadership face lawsuits and arrest, party leaders say they are investing in grassroots activism and developing the party platform in the run-up to the July national elections.

But the mounting pressure from the ruling CPP have led party leaders and activists to take a more cautious public stance as the party seeks to avoid the wrath of Prime Minister Hun Sen.

Candlelight had stated on January 18 that it was “strongly opposed to all forms of political harassment, intimidation and persecution by the ruling party.” Yet shortly after, the statement was removed from the party’s Facebook and followed by another “applauding…the purity, correctness and dignity of the ruling Cambodian People’s Party.”

On Monday, Candlelight provincial party chiefs gathered for a closed-door meeting to discuss how to navigate the party’s precarious position following the arrest and imprisonment of vice president Thach Setha and threats of violence from Hun Sen.

Candlelight’s Palin provincial chief Kem Mony Kosal, who attended the meeting, said party leaders were instructed to refrain from criticisms of the CPP but remain active with supporting local activists.

Political analyst Meas Nee said Candlelight party’s relative influence compared to any other opposition party meant it would continue to endure further attacks and its leadership has grown increasingly fragile.

“In our country’s politics, we have seen one party can swim with limbs free and the other one must compete with hands tied behind their back,” said political analyst Meas Nee. “This is a political tactic that we have seen over the past years and will continue to happen in the 2023 elections.”

Provincial party chiefs in Kandal, Siem Reap and Kampong Cham provinces declined to comment, but other provincial representatives expressed optimism despite the persecution of the party’s national leadership.

“We are still struggling forward, although we have been strengthening [locally],” said Eng Srouy, Candlelight’s Tbong Khmum provincial leader. “We are not giving up our stance that we want a positive change to restore democracy,”

He said Candlelight had been holding meetings and public forums with party members across district and commune levels to build up a provincial network for the party. Provincial party leaders have also been counselling Candlelight activists dealing with blowback from local authorities.

Candlelight’s Kampong Speu provincial chief Ty Buntheng said he remained optimistic the party could still win 50% of voters in his province as many people wanted “to change [leaders] because they don’t want the same like this.”

“I hope [Candlelight receives] 50% [of votes in Kampong Speu] because we don’t have much time to organize, and some people are still doubting that the former CNRP will be resurrected,” he said.

Buntheng said Candlelight members in Kampong Speu had yet not faced significant threats from authorities. But he acknowledged potential voters may be scared off or concerned about the party’s ability to mount a viable challenge to the ruling party as Candlelight’s predecessor CNRP had in the closely contested 2013 elections.

Candlelight announced its provincial leadership in November and December and is planning to publish an updated platform in February prior to the elections.

Candlelight leaders said they could not yet comment on how the platform had evolved since the commune elections.

“The current government has done some good things, and we want to see a message from a political party [Candlelight] to highlight a specific issue for the party to be focused on if they hold power,” he said.

CPP spokesperson Sok Eyan said his party was not worried about Candlelight’s efforts because the commune elections’ results showed the opposition only garnered about 18% of the national vote. He said

“I think that in the elections they [Candlelight] can win some seats in the National Assembly, but it is just a minor voice that cannot say anything and will be dominated by the Cambodian People’s Party,” he said.

“We are assured that there is no risk for CPP,” he added.

But Hun Sen has directed considerable energy recently against Candlelight, lashing out at the party’s supreme advisor Kong Korm and pressuring him to relinquish property or face legal consequences for comments against the CPP this month. He threatened all CPP detractors as well.

“There are two choices: the first is to use legal actions,” Hun Sen said on January 19. “And the second is to use a stick. This means that I will gather all the CPP’s supporters to hold a demonstration and hit you. So, which one do you prefer?”

“From now on, no tolerance, no exception from the bottom to the top [opposition party members], if we need to put handcuffs on, [we] will do it immediately,” he added.

The political tension had escalated from earlier this month, when Candlelight vice president Thach Setha returned jubilant from visits abroad with leaders in Japan and South Korea.

“We are ready [to join the election] and we have built our structure 100% as a whole nationwide,” Setha told CamboJA on January 3. “We hope that people will want a genuine democracy because they [people] have clearly understood life in a semi-democracy and semi-communist leadership.”

He said he hoped an open environment would prevail prior to the elections with no more threats against party members.

Two weeks later, he found himself in prison. 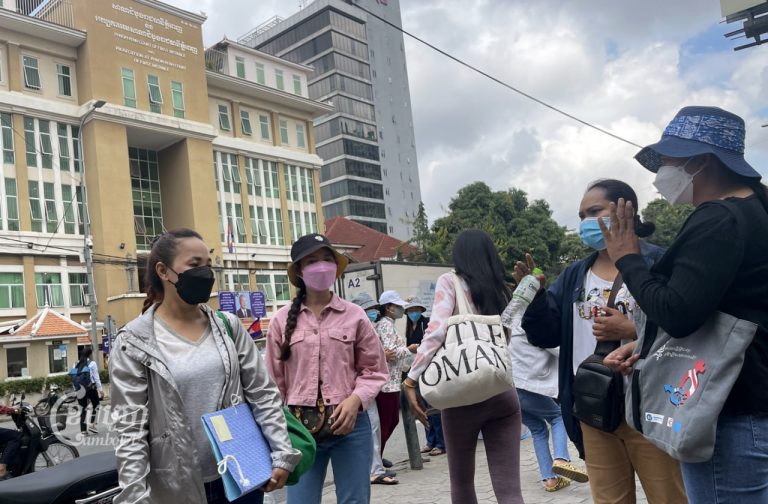