The Cambodian Center for Independent Media, Overseas Press Club of Cambodia and the Cambodian Journalists Alliance released a statement on February 25 calling for the dropping of incitement charges against former Cambodia Daily reporters Aun Pheap and Zsombor Peter.

The call came after the Ratanakkiri prosecutor’s office filed an appeal against provincial judge Kong Tang Meng’s decision to drop incitement charges against the two reporters. A local commune chief had filed the complaint in 2017 after he did not like their line of questioning for an election story.

“The case has gone on too long, upended two journalists’ careers and lives, and proven to be without merit and a shred of proof of wrongdoing since a complaint was filed against them more than three years ago,” read the February 25 statement.

Keo Pisoth, a spokesperson for the Ratanakkiri Provincial Court, confirmed that the prosecutor had appealed the November decision and the case had been transferred to the Appeal Court in Phnom Penh. He referred further queries to the Appeal Court.

Plang Samnang, a spokesperson for the Appeal Court, said he had not looked at the case because court officials were busy taking preventive measures due to the new COVID-19 cluster.

Ra Borandy, provincial deputy prosecutor at the Ratanakkiri Provincial Court, did not want to comment on the prosecution’s decision to appeal.

“It is right of the prosecutor whether to appeal,” he said.

Justice Ministry Secretary of State Kim Santepheap reacted to the three groups’ call to drop the charges by calling it an attempt to “interfere in the affairs of the court.”

“Journalists should not act like activists against any decision of the competent authorities or the government,” he told AKP.

Ith Sothoeuth, media director at the Cambodian Center for Independent Media, said the statement calls for the court to accelerate the proceedings, which had already languished in limbo for three years.

He said there seemed to be no clear evidence against the two journalists and this was evidenced by the provincial court judge’s decision to drop the charges.

“I think that if the court continues to prolong the case, it gives a bad image, and threatens and scares other journalists,” Sothoeuth said.

While CamboJA could not reach Zsombor Peter for comment, Aun Pheap said that reviving the charges meant that he could not return to Cambodia. The reporter is currently in the United States, where he has applied for asylum.

“I think it is a political game,” Pheap said from Virginia, U.S. “I can see that the prosecutor has appealed because they don’t want me to return to Cambodia because they are afraid of me writing the truth.”

The two reporters have won accolades for their investigative reporting on Cambodia’s rampant deforestation. They were in Ratanakkiri reporting on a story before the 2017 commune election, when a local commune chief, Ramam Yout, didn’t like their line of questioning during an interview. He proceeded to file a complaint in 2017, which was withdrawn sometime last year.

In 2017, The Cambodia Daily was forced to shut down after refusing to pay an exorbitant tax bill, as part of a crackdown against independent media institutions that also targeted Radio Free Asia, The Phnom Penh Post and Voice of America.

Nop Vy, executive director at CamboJA, said the request to drop the charges against Peter and Pheap was not an attempt to meddle in court procedures.

“They [reporters] have not caused damage or social impact,” he said. “So, we are concerned because the accusation against them has affected their professional work and had to flee Cambodia.” 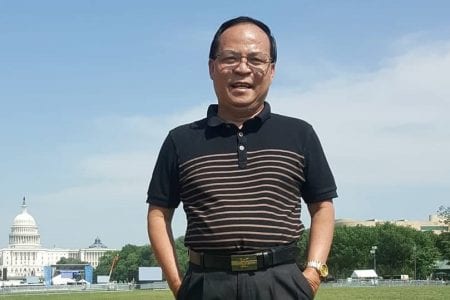