The Supreme Court on Friday decided to release on bail Suong Neakpoan, an activist who was charged with incitement to commit a felony for a protest on the anniversary of political commentator Kem Ley’s murder.

Neakpoan was arrested, charged and placed in pretrial detention in July, when he was seen distributing leaflets calling for an end to extrajudicial killings. Ley, a popular government critic on radio, was shot dead at an inner-city gas station on July 10, 2016.

Around the time of his killing, Ley was writing a series of parables about political corruption in Cambodia, and also urged an investigation into the wealth of Prime Minister Hun Sen’s family following the release of a report by NGO Global Witness.

The Supreme Court heard Neakpoan’s bail appeal on Friday and overturned the Appeal Court’s decision of Aug. 13 to deny bail.

Defense lawyer Ly Sochetra told the court that Neakpoan was still a student and wanted to continue his studies. He also needed to earn money to support his four siblings, and he was suffering from the flu, he said.

“He is a student, so he cannot cause chaos in society,” Sochetra said.

Soeng Senkaruna, spokesman for rights group Adhoc, said the cases against Neakpoan and Raiya violated the right to free expression.

“The court should release them and drop the charge,” Senkaruna said. “We want to see them free.” 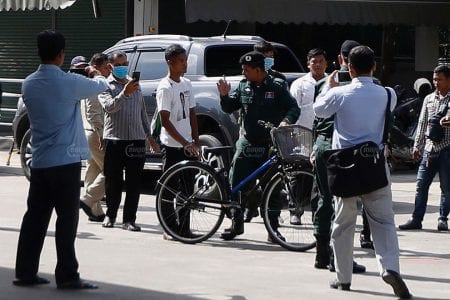