The government announced Monday it would be extending the lockdowns of Phnom Penh and neighboring Takhmao city in Kandal province for one more week. But in spite of what officials insist has been large scale food distribution, some of Phnom Penh’s poorest and most vulnerable say they are struggling to feed themselves and concerned over how they will make it through another week.

Phan Sophors, 37, a garment worker who lives in Chumpouvan 2 village, in Pur Senchey district’s Choam Chao 2 commune said that many of his neighbors who live in rental rooms have faced food shortages.

“Yesterday [Monday], we received 100 kg of milled rice for humanitarian aid [for the neighbors] and I took it to provide any workers who did no have rice for cooking and after that an aid worker provided 100,000 riel through him and he took that money to buy 50 kg of milled rice,” Sophors said. “They [the neighboring workers] have met with food shortage for about five days.”

Sophors said that if the government does not help them sooner next time, they will face serious food shortages because none have been paid their salaries due to the lockdown.

In Channa, 41, who lives in Meanchey district’s Boeng Tompun 2 commune said that he and his wife both have disabilities from polio and already struggled to support their two children. Normally, they sew bags for sale, but have had no customers for months.

“We lost income about two months ago, so we do not have money to buy good food and we need to pay our rent,” Channa said. Their landlord gave them a 50 percent discount, charging only $100 for two months, and providing free water and electricity, but the couple still need money to pay their children’s school fees and for food.

He said three other disabled families living nearby who had the same business were facing the same problems.

“I request the government and authority help to provide some food to all disabled people who have been meeting with food shortage during the COVID-19 pandemic,” Channa said, adding that he doesn’t understand why they’ve received no help thus far.

Sauth Proch, 33, a garment worker who lives in Meanchey district’s Stung Meanchey 3 commune said he did receive rice from the authorities near the start of the lockdown, but after more than two weeks staying in his small rental room — and without access to food apart from rice — he has not been feeling well.

“Now, I have food but I still feel bad because I only stay in the room for more than two weeks,” Pheara said, adding that he didn’t have money to buy fish, meat, or vegetables — and wouldn’t be allowed out to buy it even if he did.

Phnom Penh and Takhmao have been under lockdown since April 15, though several communes and villages, including Stung Meanchey 3, have been locked down since April 10. Since the lockdown began, at least seven areas were designated red zones, and subject to harsh restrictions, with people allowed outside their homes only for emergencies.

Phnom Penh governor Khuong Sreng, said he would hold a meeting Wednesday to discuss with local authorities how to implement the extended lockdown. He said that 400,000 families in Phnom Penh had received food aid from the government thus far.

“It is very good. I want to say that no country provides gifts on time like Phnom Penh has. The government immediately gave us the aid and the Phnom Penh administration immediately offered it to the people,” she said.

Men Neary Sopheak, a spokeswoman for Cambodian Red Cross said that it has mostly focused its COVID-19 aid in the provinces and that the Phnom Penh authorities have primarily been handling food aid in the capital.

The government on Monday evening announced it was extending the lockdowns in Phnom Penh and Takhmao city in Kandal province for another week to May 5 to cut off the spread of COVID-19. In the updated lockdown announcement, the government extended the current red zones and listed new ones, to run from April 29 to May 5. The red zones now include three villages in Boeng Salang commune; one village in Prey Sar commune; three villages in Dangkor commune; Stung Meanchey 1, 2, and 3 communes; Boeng Toumpun I commune; Tuol Sangke I commune; and Choam Chao 1 commune.

Moeun Tola, executive director of Central, said that while lockdowns have been seen globally, Cambodia’s has been overly complicated at times — such as when the lockdown was first put into effect without any advance warning.

If people lacked food, he said, it would be difficult for them to follow orders even if they wished to.

“The state should be considering that if the state does not give aid to help the people especially the people who have low income including workers, tuk-tuk drivers, and small vendors… if they don’t have income, they will find it difficult to respect the state’s measure,” he said.

“For red zones, the state should provide aid faster to ensure they have enough food to eat,” he said, adding that many persons with disabilities and the extremely vulnerable — such as cyclo drivers — faced worrying food shortages.

As of Tuesday afternoon, 82 people have died of COVID-19 — all from the latest outbreak. Health officials have recorded 10,513 new infections since the February 20 community event, with a total overall case count of 11,063 cases since the start of the pandemic in early 2020. 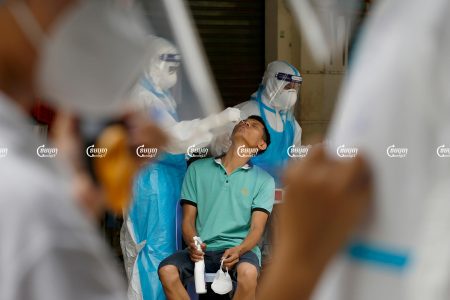