Despite continued efforts from government and NGOs sex and entertainment workers in Cambodia remain at high risk of violence and face discrimination in many forms, women from the industry told CamboJA this month.

At an event marking the International Day for the Elimination of Violence Against Sex Workers, held in Phnom Penh on December 17, Chhim Sophal, who works as a project officer for Association for Vulnerable Support Women said that police are part of the problem.

When they learn women facing violence or discrimination are sex workers, they don’t take their complaints seriously and in fact often arrest the women, taking them to jail where they are humiliated and their heads are shaved.

“Sex workers are also our neighbors,” she said, adding that authorities and commuity members need to learn they are not to be discriminated against but rather helped.

Ms. Sophal said there have been numerous recent cases of vulnerable women being abused and of clients refusing to wear condoms. Her organization is launching a campaign to raise awareness of such problems in ten areas in Phnom Penh.

You Manang, 55, has been working as a sex worker since the UNTAC era and says she has encountered many forms of discrimination – from mockery to shocking violence.

“I’ve been beaten, gang-raped, robbed and abused. Thinking about it sometimes I want to die, but I think of my children,” she said.

You Manang said no-one wants a job like hers, but she had to do it because her husband was a gambler and a drunk and hit her. With seven children to support, she started waitressing at a bar.

“I escaped from my husband because he mistreated me and I raised seven children alone. I have no choice… I have to accept the harassment in order to send my kids to school,” she said, breaking down in tears.

“I am a sex worker, but I am also a human, not an animal,” she said. “When we have a problem, we go to the police and they do not want to solve it for us. They still use the word ‘prostitute’ and say we’re polluters of society.”

“The community is still discriminated against, especially when they see how sex workers dress. They look down on them and say they are bad women,” she told CamboJA.

She said her organization runs training workshops several times a year to help teach sex and entertainment workers about self-defense and where to go for help if they are victims of violence.

“This is very important because most of us do not have a high level of education and we don’t know what to do and who to go to for help when being discriminated against or abused,” she added.

Dang Chiva, a village chief in Phnom Penh’s Russei Keo district, claims that while abuse of sex workers still happens, it’s better than it was and many women have found other work in garment factories.

But he said men still need to be taught to respect sex workers.

“Men, if you use their services, do not abuse them, they don’t want to do this work but are forced to because of poverty and living conditions. And no matter what they do, they are human beings like us,” he said. 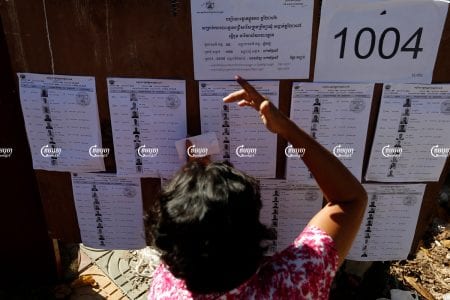