More than 1,000 garment workers from two factories in Kandal province are waiting on a joint committee of Labor Ministry and local officials to decide their fate after going six months without pay.

Dignity Knitter factory and Eco Base factory in Takhmao City, both of which have the same owner, suspended operations in March and promised to compensate employees for their months of back pay, plus half pay in the months following suspension, according to union representatives employed there.

Ministry and union officials said the Labor Ministry had formed a joint committee with provincial authorities last month to sell off sewing machines and other equipment at the factories in order to provide compensation to workers.

Ou Ratana, a deputy secretary-general of the Committee for the Resolution of Strikes and Demonstrations at the Labor Ministry, said the joint committee was doing its best to find a solution.

He said the committee was carrying out an inventory of the factory’s assets, which it would sell in order to compensate workers, adding that workers were not included on the committee because they are victims in the case.

“We are continuing to look for a solution based on procedures,” Ratana said.

Siang Yot, a legal officer at CCAWDU, said that a resolution had been delayed because the Labor Ministry had run into a dead end after discovering that the former owner said he had handed over the company to someone else.

He pointed out that although the Labor Ministry had created a joint committee to count equipment at the factory, it was unfair not to allow union or worker representatives to join.

“I think that it is not transparent, because members of the joint committee should come from all parties,” Yot said. “It should also include representatives of the unions and workers.”

Yot added that finding a solution for the workers had become more complicated after the provincial court issued an injunction recently to prevent equipment in the two factories from being sold, as the factory owner also owed money to other parties. The other parties include the workers’ transportation company, an equipment repair company, and another Chinese company.

“Now, we are monitoring the activity of the joint committee,” Yot said.

“I request the authorities to take action against the factory owner based on the law,” he said, adding that the government could start by using its own funds to pay out workers.

Phin Sophea, a CCAWDU representative who was employed at Dignity Knitter factory for 14 years, said that about 400 to 500 workers had gathered outside the factory on June 30 waiting to hear the committee’s findings, but were instead told that the inventory was not yet completed.

“I do not know whether all the property in the factory is valuable enough to provide compensation for all workers because a joint committee did not count it all yet,” Sophea said. “Some equipment was protected by a court injunction because other parties had also filed a complaint to the provincial court.”

He added that more than 800 workers have not been unable to meet their daily expenses for the past six months.

“Some workers have not been able to pay rent and some have borrowed money from people to afford their daily living costs, while a few others were able to find part time work with another company,” he said.

Since the factory had shut down in March, workers had divided into shifts to stand guard in front of the factory day and night to prevent the owners from returning to take back their assets from inside the factory without paying the workers, Sophea explained.

Leng Srey, 45, a CCAWDU representative at the Eco Base factory who had also worked there for 14 years, said all of the company’s 224 employees had not been paid since January, although the factory did not suspend operations until March.

She added that she was behind on her rental payments and had not been able to seek other work because she had been helping guard the factory along with the other former employees.

“I appeal to the joint committee, please help to solve this case quickly because now we are finding it very difficult to live,” Srey said.

According to a recent statement from the Garment Manufacturers Association in Cambodia, since the beginning of the pandemic, some 400 factories in the Cambodian apparel, footwear and travel goods sectors have had to suspend operations, and most others are operating at reduced capacity. More than 150,000 workers in the sector, most of whom are women, have lost their jobs. 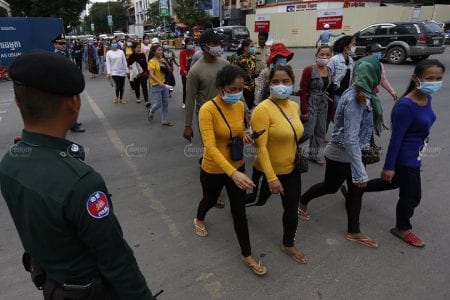