Surrogate mothers now fear babies will be taken away

Nika* had hoped that the child she was carrying for a Chinese couple would let her budding family build a home.

Her husband, a construction worker, and her 5-year-old daughter never had very much, and the $8,000 potential payout seemed like a fortune.

But in June last year, at nine months pregnant with the in vitro fertilized fetus, she was arrested for participating in the illegal surrogacy trade.

She spent six months in detention — during which she gave birth to a son — before Nika, alongside 31 other surrogate women who were arrested at the same time, was released on bail in December.

Though they still struggle to make ends meet, Nika sees her son as entirely hers.

“I always think that he is my real son, not anyone else’s. I love him as my son,” Nika said.

However, Srey Nich, another of the surrogate mothers released on bail in December, said there were lingering anxieties.

“Sometimes I’m afraid that someone will come into my village and take away my baby to the biological parents,” Srey Nich said. “That’s why I never let him visit the neighbor without me or another family member to keep an eye on him.”

The son whom Srey Nich gave birth to through the surrogacy deal was her first child. She said her husband also doted on the boy.

“But among our neighbors not everyone thinks the same. They gossip about me,” Srey Nich said. She was worried how her son would be treated in the future.

“I’m concerned they will tell my son about his background,” she said.

Both women said poverty had driven them into the controversial trade.

After the practice was banned in Thailand in 2015, the booming surrogacy trade crossed the border into Cambodia.

Concerned authorities portrayed the trade as the selling of Cambodian babies, and sought to stamp it out under anti-human trafficking laws. An Australian surrogacy broker, Tammy Davis-Charles, became the first of many arrested in November 2016.

Dozens of surrogate mothers have since been arrested while pregnant and their surrogacy deals annulled. Dozens of babies, intended to be handed over to foreign couples, have been born and are being raised by the surrogates.

Chou Bun Eng, vice chair of the National Committee for Counter Trafficking, said many of the women were still on bail, meaning they could not travel far from their home villages to find work.

“We’re working with an NGO partner to support them and provide them some job opportunities,” Bun Eng said.

However, Nika, who was previously a garment factory worker, said it wasn’t only the bail conditions that prevented her from finding work.

Police had confiscated her identification card upon her arrest and had not returned it, she said.

“I can’t use a fake document or borrow one someone else, as it is stricter now,” she said.

Her family was falling deeper and deeper into debt, Nika added.

Srey Nich said she was in similar dire straits, resorting to borrowing from moneylenders to buy food.

“My daily life is so difficult,” she said. With her husband’s work inconsistent, she relied on her mother to help with interest payments. Sometimes she felt she did not have enough to provide for her son.

“When he is sick I don’t have the money to pay the medical bills. It makes me so frustrated with myself,” Srey Nich said.

She said she only hoped that her son would have a different life than hers.

“I want my baby have a very good future when he grows up. I want him to become a doctor or a translator.”

*The full names of Nika and Srey Nich have been withheld to protect the identities of their children. 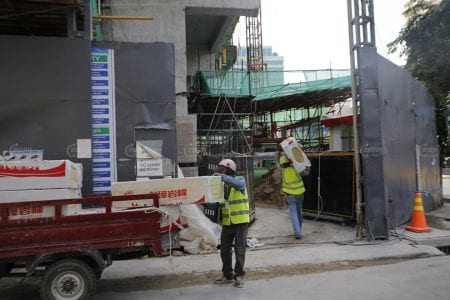