Three supporters of the former Cambodian National Rescue Party were arrested outside the Chinese Embassy when they attempted to gather with 100 others to submit a petition calling for the Cambodian government to respect the Paris Peace Agreements on the 29th anniversary of their signing.

The three activists with the now-dissolved opposition party, Lim San, 57, Yoy Srey Mom, 50, and Ton Nimol, 40, were apprehended by police officials and district security guards near the embassy at 8am, while six journalists were harassed and threatened as they covered the interaction.

San Sokseiha, spokesman for the Phnom Penh Municipal Police, confirmed that two women and one man were arrested because they did not have permission from City Hall to protest, and said police had to act to ensure the safety of others near the embassy.

“Because they do not have permission and they caused other problems, the authorities brought the three of them for questioning, not to detain them,” Sokseiha said.

He noted that police officers can detain suspects for 48 hours, after which point they must request a prosecutor’s authorization to continue questioning.

“They made a mistake… they opposed public security,” he said. “The level of their guilt is based on the questioning and [the authorities] will then ask the prosecutor if the prosecutor thinks they are guilty.”

Before the roughly 100 protesters arrived in the morning, 200 to 300 mixed security forces had already been deployed outside the embassy to prevent the demonstrators from gathering. When small groups of protesters approached the embassy, the authorities broke up the groups and pushed them away from the wall of the compound.

As the security officials shoved demonstrators and made the three arrests, some authorities scuffled with journalists and shouted at them not to take any photos or videos.

Hong An, 45, a demonstrator who traveled from Oddar Meanchey province, said that the group was not successful in submitting their petition at the Chinese Embassy.

“I really regret that the authorities arrested three people from our group and tortured San Pha and sister Nisa,” An said, referring to two women protesters who were injured in clashes with security guards.
She noted that the US and French embassies had accepted the petition when the group visited the embassies to submit it later in the day.

“I request all signatory countries to help restore democracy in Cambodia immediately because Cambodia does not respect democratic law or human rights on Paris Peace Agreements Day,” she said.

US Embassy spokesperson Chad Roedemeier confirmed document had been received, and said the US urged the Cambodian government to respect freedom of expression and assembly.

“We have consistently raised democracy and human rights concerns with the Cambodian government, and urged the government to take meaningful steps to reopen the political and civic space,” he said.

“We support the Cambodian people, and their constitutional right to democracy and fundamental freedoms,” he added.

Keo Chenda, 47, a CNRP supporter who came from Siem Reap province to attend the protest said outside the French Embassy that she wanted the government to respect democracy as guaranteed by the Paris Peace Agreements.

“I want our country to have complete democracy,” she said.

“[The government] has abused the Paris Peace Agreements …by dissolving the Cambodian National Rescue Party. The CNRP was selected by the people, but they do not allow the people to vote to dissolve it and they do not ask the people’s opinion,” she said.

San Pha, 47, another opposition party activist, was injured when security officials shoved her to the ground and violently stomped on her leg while she was trying to help the protesters who were being arrested, she said.

Seng Visal, 46, a demonstrator who traveled from Preng Veng province with more than 10 others, said that when she tried to approach the Chinese Embassy, she was pushed to the ground several times by district security guards.

“We want the government to follow the Paris Peace Agreements,” she said. “Please, do not [use violence]. The government is infringing on the people’s rights. I just came to congregate with my group to submit a petition at the Chinese Embassy but instead I was pushed.”

Chan Ton, father of arrested activist Nimol, said it was not fair that his son had been detained.

“I think that arresting my son and the other two people is human rights abuse and against the law,” he said. “If they can just do what they want, then the country doesn’t need any law.”

“Tomorrow, I will protest against the Phnom Penh authorities to release my son,” he added.
Meanwhile, 24 civil society groups, associations and trade unions held a separate gathering to mark the signing of the Paris Peace Agreements, calling on the government to follow the principles laid out in the agreement and reinstate October 23 as a national holiday.

Social researcher and political analyst Meas Nee addressed the roughly 700 attendees at the event, saying that the current government led by the CPP has failed to uphold its obligations to national unity, respect for human rights, and social democracy, as stated in the agreements.

“In my view, in a society, if there are still accusations of betraying the nation….it is not possible to have national reconciliation and unity as long as we still hear names like ‘rebel’ and ‘outlaw,’” Nee said, explaining that if there is still a rebel group, then there is no national unity.

Calling for October 23 to be reinstated as a national holiday, Nee compared the country’s recognition of 7 January with the decision made last year to remove October 23 from the list of holidays.

January 7 is seen as a new beginning marking liberation from the Khmer Rouge regime, even though it failed to bring peace, he said. Meanwhile, the Paris Peace Agreements put an end to armed conflict in Cambodia, yet the national holiday is no longer recognized.

Speaking via Skype at the event, Thun Saray, president of rights group Adhoc, urged Cambodian politicians not to forget their experiences from the past and to avoid putting the Khmer people through further suffering, which involves respecting the Paris Peace Agreements and the Constitution.

“Khmer people who are educated and who own the country, please dare to speak up, and demand our rights and freedoms,” he said.

“Our politicians need to listen to the voices of citizens, and listen even if it is painful,” Saray said.

Sok Eysan, spokesman for the ruling CPP, said by phone that Victory Over Genocide Day on January 7 marked “a second life for the Cambodian people,” as it brought a policy of national reconciliation which eventually led to the signing of the Paris Peace Agreements.

“If there is no 7 January day, 23 October wouldn’t exist,” he said, adding that the government has fulfilled the requirements of the Paris Peace Agreements by including aspects of it in the Constitution.

“It is their [Meas Nee and civil rights groups’] opinion, but the population of 16 million agrees with the government policy that is led by the CPP,” Eysan said, insisting that the Khmer people are not divided.
He further explained that the government had to reduce the number of public holidays, including Paris Peace Agreements Day in order to attract investors to Cambodia.

Eysan said that the current government is walking on a democratic path and following the rule of law while maintaining peace, political stability, and public order.

“Citizens’ fundamental freedoms have become more restricted, especially their right of assembly,” he said, adding that authorities should find a resolution instead of resorting to violence.

Sam Ath said it seemed that the measures taken against the protesters were due to orders from Prime Minister Hun Sen, who warned on October 21 of a crackdown against anyone who dared to protest outside the embassy as called for by Sam Rainsy.

“We are worried that [Cambodia] will come under more criticism for its human rights violations,” he said, citing recent calls by the UN’s human rights experts and the European Union for the government to restore democracy and human rights.

Cambodian Journalists Alliance (CamboJA) and the Cambodian Center for Independent Media (CCIM) issued a joint statement raising concerns over the intimidation of six journalists outside the embassy.

Authorities intimidated a reporter from VOD by chasing him when he stood nearby as police questioned a protester, then tried to confiscate his phone as he attempted to take a photo.

Two other news producers at VOD were briefly questioned after they scuffled with police, who forced them to leave the site, and another reporter at VOD was ordered to stop his Facebook Live stream of the demonstration.

“These are threats that [we] cannot accept while reporters are carrying out their profession. Authorities seem to consider reporters as observers who are making it more difficult for them to crackdown on protesters,” said Nop Vy, executive director at CamboJA.

“The threats will put more pressure and restrictions on freedom of the press in Cambodia,” said Ith Sothoeuth, media director at CCIM.

Responding to the harassment of journalists, Information Ministry spokesman Meas Sophorn said authorities were only doing their jobs.

“When authorities are carrying out their duties, we [journalists] have to cooperate with them,” he said.

“Reporters have the right to access information, but they still must cooperate with authorities, and it does not mean if you are a journalist, you can do whatever you want at any time without respecting the rights and the obligations of authorities,” Sophorn said. 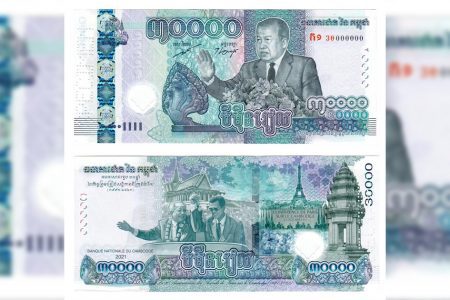 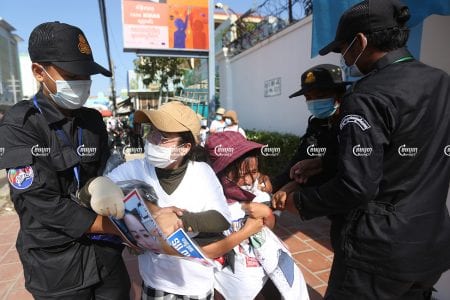 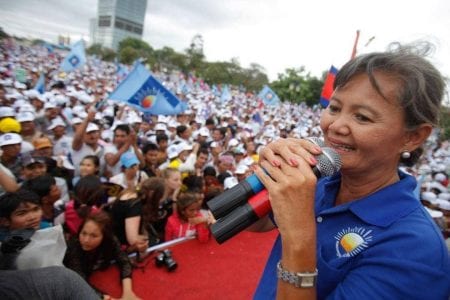