After more than a year, workers at two factories receive compensation

In the early morning cool, 51-year-old Sao Na stood outside the Kandal Provincial Hall ground on Friday wearing a helmet, armed with rice, sweetcakes and one last slither of hope she would finally receive a long-promised payout.

After more than ten years of service, the Dignity Knitter factory stopped paying her in December 2019, then suspended operations, and then shut down without notice – leaving her and about 1,000 co-workers there and at the nearby ECO Base factory jobless and owed thousands of dollars each.

After a year of broken promises, the provincial court this month sold more than $1.1 million worth of equipment seized from the shuttered factories, which will be split between more than 1,000 workers, who have stood vigil at the factories around the clock for months and staved off multiple attempts by management to take back their goods.

About 50 workers were waiting outside the court by 7am, each of them with a story of hardship brought on by losing their jobs in the middle of a pandemic – and many of them unable to move on without having resolved the dispute.

Na had done a few shifts guarding the factory but then went to work on a construction site alongside her husband. But after a few months earning $7.50 a day labouring, she was laid off, unable to keep up, and became the on-site cook.

“I had no choice but to go to a construction site. Factories won’t hire me because I am too old,” she said.

“Garment work is easier than construction work because factory work is regular,” she added, explaining how her job ironing at the factory came with a guaranteed $200 every month, compared to $7.50 per day labouring on a worksite.

While she did not have much to show for working at the factory for more than decade, she had sold it all, including a treasured necklace and bracelet, just to keep her three children fed.

The Labour Ministry will disperse more than 1.2 million to workers over two days –$1,110,009 from selling items seized from the factory and $160,000 lodged with the ministry by the Chinese factory owner, a provincial official told CamboJA.

A committee formed to resolve the dispute agreed to sell the goods at a reduce price earlier this month after two failed attempts to auction them with a reserve price of $1,777,000.

Ket Sokny, 30, who worked for 12 years at Dignity Knitter, said she had not found work since it was shuttered and had dedicated her time to guarding the factory and spending time with her five-year-old daughter.

With her husband’s earning from growing fruit irregular and Covid-19 putting a further squeeze on the family, they was forced to cut back on spending.

“I had to reduce expenditure on items which are not necessary, including new clothes and shoes,” said Sokny.

After more than a decade working in the factory producing socks, she would invest her $1,500 payout in her husband’s fruit farm and seek work in a new factory.

“At least we don’t have to sleep in front  of the factory anymore,” she said.

The workers at the two factories had been claiming wages and bonuses withheld since December 2019, when the factories began to scale down operations before three months of work suspensions leading up to the official shutdown in June.

One in five garment workers go hungry on a daily basis, with 90% having reduced how much they eat during the pandemic, the Worker Rights Consortium, an international advocacy group, said in December after surveying about 400 workers in nine countries, including Cambodia.

Phorn Vanna, who spent 13 years in quality control at Eco Base, said that she had taken to selling drinks and sour fruit snacks in front of her home in Kandal Stung district.

She said she was just looking forward to not having to think about the dispute any more, but that her $1,700 compensation was sure to be gone fast, with $180 due in bank loan repayments each month.

“I have been selling for a year but it’s not regular income,” she said, adding that she made a few dollars a week. “I tell you the truth, I will use this money to reduce debt with the bank.”

Workers faced a “mounting human rights crisis as they struggle to feed their families and hold onto their land under immense pressure from microfinance institutions,” the groups said in a report.

Chhoeut Rany, 37, who worked for 10 years at Eco Base, said she received $1,200 on Friday – $50 short of what she owes to for a loan taken out to dig a well and feed the family while unemployed in her hometown in Prey Veng province.

“Everyday expenses have become problems since the factory closed, including paying for food every day and sending my children to school,” she said.

“It’s a bit late for a solution. We waited more than a year.”

Phin Sophea, a representative for the Coalition of Cambodian Apparel Workers Democratic Union (CCAWDU) at Dignity Knitter and organizer of the push to be repaid, said he was happy that the nightly vigils at the factories could end.

After leading the push for compensation, he would consider going to work with the union in Preah Sihanouk, where manufacturing is booming inside multiple special economic zones – but he isn’t sure yet.

“In my heart, I want sell porridge or rice and soybean milk but I do not know yet whether I can do that,” Sophea said.

Ou Ratana, deputy secretary-general of the Committee for the Resolution of Strikes and Demonstrations at the Labor Ministry, said 600 workers would be paid Friday and the remainder Saturday, with a just a few thousand dollars left over from the $1.2 million.

“It might look as though this solution has taken a long time, but it has not been easy,” he said, refuting complaints from workers about a lack of commitment from officials.

While most of the 1,000 workers had found new work, the ministry would find work for any who had not, he added.

At the same time,103 factories opened and 61,257 additional jobs were created, the minister added.

For Na, the mother who arrived at provincial hall with rice and sweet cakes, the end of the saga and $1,300 payout will mark the beginning of a new chapter in her life, in which she will buy a new golden necklace before returning to her husband and kids in Prey Veng.

“I will use the rest of the money to buy some chickens and raise them back home,” she said. 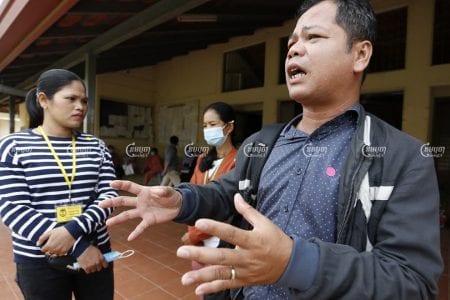