As public health officials continue to find new community transmission cases of the more-contagious Omicron variant of COVID-19, the prime minister is urging provincial authorities to speed up their booster vaccination campaigns.

On Monday alone, said Hun Sen in an audio message, officials detected 34 new Omicron cases and have found a total of 14 community transmission infections so far. Before the message went public, the Ministry of Health had reported nearly 200 new infections of the Omicron variant. In response, Prime Minister Hun Sen on Monday said he has ordered the purchase of 5 million more doses of COVID-19 vaccine.

Authorities need to speed up the boosting dose to respond to the Omicron infection in the community because we have no better choices than this,” he said.

According to Hun Sen, the government needs 8 million more doses of vaccine to facilitate the booster campaign. He said the state currently has more than 10 million doses in stock.

The prime minister had warned last Wednesday that if the Omicron variant spread into the community, the public may see a return of lockdown measures. He also said all Omicron patients will not be allowed to recover at home but will be required to quarantine at a hospital.

The Health Ministry has announced a fourth booster dose for priority workers, including journalists, using the Pfizer vaccine. Cambodia has just received 2 million doses of Pfizer vaccine, donated by Australia. The country has so far used a majority of Chinese-made COVID-19 vaccines, Sinovac and Sinopharm.

The Health Ministry reported the first community infection of the Omicron variant on January 8 after a 23-year-old man tested positive for the virus. According to the ministry, the first community infection was reported in the capital’s Tuol Sangke commune in Russei Keo district. However, the man was found living about 7.5 kilometers away in a Meanchey district commune.

Ministry spokeswoman Or Vandine declined to comment on the discrepancy.

Seng Sivantha, deputy commune chief of Stung Meanchey 2, confirmed that the man has been living in the commune.

He said that as of Monday, the commune had found two cases of the Omicron variant while testing many people. However, he said the local authorities have not put in place any restrictive measures on travelling within the community.

“Other directly contacted people have been tested and we are just waiting for the results,” he said. “We found one student infected with Omicron in the commune as well.”

According to Sivantha, the Omicron variant was detected in two villages in Stung Meanchey 2, Prek Toal and Village 5.

Some local villagers told CamboJA they hadn’t heard that Omicron had been discovered in their community.

“I don’t see local authorities informing people in the community about Omicron, however, what we have to do is to protect ourselves from the virus as we are also worried about children as well,” said the 58-year-old Chea Mom.

Another local, Troeung Pheakdey, said he’d seen an ambulance in the neighborhood on Sunday but hadn’t heard any news about the new strain of COVD-19.

Pheakdey, a food delivery driver, said he was worried about the reportedly high infection rate of the new variant of COVID-19.

“If the outbreak in the community leads to the lockdown again, it will affect our revenue,” he said. “We just reopened the country for only two months.”

On Monday, the Health Ministry reported a total of 120,636 cases of COVID-19 since the pandemic began in early 2020. The large majority of these cases have been recorded since February 20, when the ongoing community outbreak began in Cambodia. The ministry has also recorded 117,023 recovered cases and 3,015 deaths from the virus. 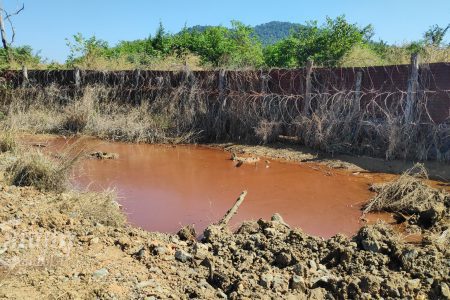