Cambodia has started vaccinating children as young as six years’ old against COVID-19 using the Chinese-made Sinovac vaccine, despite the fact that the vaccine has not yet been approved by the World Health Organization for children under 12. There are plans to vaccinate children as young as three years’ old in the next phase of the nationwide campaign.

Prime Minister Hun Sen, who brought his grandchildren to be vaccinated on the first day of the campaign on Friday at the Peace Palace in Phnom Penh, said that the vaccination of children between the ages of six and 12 is entirely voluntary.

He said some countries have already done so, such as China, Cuba, the United Arab Emirates, Peru, Germany and Bahrain, while the United States and Israel are preparing to study the effects of COVID-19 vaccines on children.

“We need to take advanced steps to protect our children so that they can receive health care and get into school safely, both teachers and students in primary school,” he said.

According to Hun Sen, about 1.9 million children between the ages of 6 and 12 will be vaccinated, bringing the total number of targeted people to more than 14.6 million, or 91 percent of the total population of 16 million.

As of September 16, more than 11.5 million people have received at least one dose of a COVID-19 vaccine, and more than 10 million have been fully vaccinated, according to the Ministry of Health. More than 800,000 people have also received a booster shot for the vaccine, which the prime minister said he considered impressive compared to some other countries.

“This should not be seen as competition in the rollout of vaccines, but Cambodia has an obligation to protect the lives of its citizens and to restore socio-economic conditions, including education, which is a priority,” he said.

Hun Sen said that the government will also develop a strategy to allow fully-vaccinated foreigners to visit Cambodia.

Chao Sothy, who took his eight-year-old child to receive the COVID-19 vaccine at Dangkor commune on Friday, said that he was nervous about the potential effects of the vaccine.

“Honestly, I’m worried about getting my child vaccinated, but I need to take them for vaccination in order for them to go back to school,” he said.

Vong Mab, a father of six, said that his other five children have been fully vaccinated, leaving only one 11-year-old child that was vaccinated on Friday.

“When all people get vaccinated, we will also do so, and I do not worry because children have a stronger immune system than adults,” he said.

WHO and UNICEF have said that so far, only the Pfizer COVID-19 vaccine has been reviewed by the WHO’s Strategic Advisory Group of Experts (SAGE) for use on children above the age of 12.

WHO representative in Cambodia Dr Li Ailan told CamboJA by email that much research on the short- and long-term effects of COVID-19 infection in children, as well as the safety profile of vaccines in children, is still ongoing.

“We are aware that China approved emergency use authorization of inactivated vaccines to children aged 3-17 years old,” she said. “Much research on other vaccines is still ongoing and more evidence may become available in the future.”

She said WHO has suggested that children and adolescents with underlying health conditions be included in vaccine roll-outs where community transmission is high.

“In these cases, adults in the same prioritization group should be vaccinated before children with underlying health conditions,” she said.

UNICEF representative in Cambodia Foroogh Foyozat said that clinical trials with children are ongoing, but that so far WHO’s SAGE has concluded that only the Pfizer/BionTech vaccine is suitable for use by minors aged 12 years and above.

“Other vaccines, such as Sinovac and Sinopharm, have been approved for emergency use authorization in some countries for children 12-17 years old, including China, Indonesia and recently Cambodia,” she said. “Trials are still going on in children; it may take a few more months to get more data on children at younger age groups and for enough evidence to accumulate for other vaccines to be approved.”

Foyozat said that children aged between 12 and 15 who are at high risk may be offered this vaccine alongside other priority groups for vaccination, and that WHO will update its recommendations when the evidence or epidemiological situation warrants a change in policy.

She stressed that the global evidence since the start of the pandemic shows that COVID-19 does not pose a high risk to children, and that schools are not drivers of transmission within the surrounding community.

“Globally, children account for a very small proportion of confirmed COVID-19 cases,” she said. “Children of primary-school age and younger are among the least likely cohorts to be infected.”

To date, 2,641 schools have reopened nationwide since September 15. The Education Ministry announced on Friday to temporarily suspend in-person learning in five high schools in Phnom Penh for 14 days after positive cases of COVID-19 were found among students. 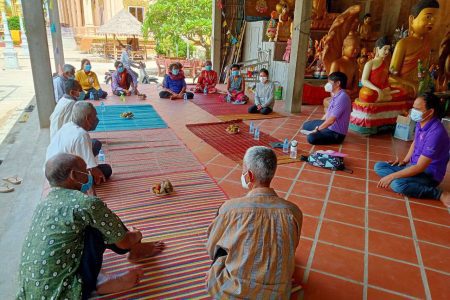