Three environmental activists have been sent to pre-trial detention on charges of plotting and insulting the king by the Phnom Penh Municipal Court. The co-founder of environmental group Mother Nature has also been charged in absentia.

The two activists, Sun Ratha and Yim Leanghy, as well as Mother Nature co-founder and Spanish national Alejandro Gonzalez-Davidson, were charged with both plotting and insulting the king. A young activist Ly Chandaravuth was charged only with plotting. Their lawyer, Sam Sokong, told CamboJA that all three local activists were now behind bars.

“All of them were sent to pretrial detention at Prey Sar prison’s CC1 and CC2,” he said. “These charges are serious, because the activists are just working to protect natural resources and the environment.”

Sokong said that he could not expand on their activities while the court’s investigation was ongoing. He said that he will submit a bail request for his clients next week.

Speaking on Monday, deputy prosecutor and court spokesperson Plang Sophal confirmed that the four had been charged, but declined to give more details. The charge of plotting is based on article 453 of the criminal code, and carries a sentence of five to 10 years. For the charge of insulting the king, the activists are facing between one and five years in prison.

The three young activists were arrested last Wednesday alongside fellow activist Sith Chhivlimeng, who was later released from custody. National Police spokesman Chhay Kim Khoeun confirmed on Friday that Chhivlimeng had not been named in the police report.

He claimed that the arrest had come after police had found evidence showing the activists had worked with illegal organisations under the direction of Gonzalez-Davidson to topple the government under the pretext of environmental activism.

“This group operates with a well-organized organization of foreigners mapping their activities and operations,” he claimed.

Mother Nature co-founder Gonzalez-Davidson said last week that the activists should not have been arrested, saying that they had just been taking pictures of sewage being dumped into the Tonle Sap River. He said that he did not know the reason for Chhivlimeng’s release.

“The protection of natural resources as well as the betterment of Cambodia’s society is something to be immensely proud of, nothing to be ashamed of, let alone a crime,” Gonzalez-Davidson said. “The only resolution is that the activists are freed without conditions [as soon as possible].”

Chandaravuth’s mother, who declined to provide her name over fears for her safety, said that her son was a good person who worked hard at his studies and never argued with others.

“I cannot accept the charges against him because my son does not do anything illegal, and what he does is for Cambodian citizens and national property and society,” she said. “He just wants Cambodian people to live with a good environment.”

She called upon the government to encourage and promote environmental activists to help society rather than arresting and accusing them.

“I think that if the government and authorities help to secure their safety and encourage them to protect national resources and the environment, the country will become better and better in the future,” she said.

Deputy director of monitoring at human rights group Licadho Am Sam Ath said that these charges were harsher than those previously brought against other environmental activists, a number of whom have been charged with incitement over the past year.

“These charges are serious, so it threatens and scares other young activists and people who want to join to protect the environment,” he said.

Sam Ath said he did not know what evidence had been used to justify the activists’ arrests.

“However, we have seen that the youths’ activities are just activities to protect the environment,” he said.

On Monday, the Lover Environment and Society Association issued a statement asking the authorities to drop all accusations against the environmental activists.

“We request the authorities to stop threatening and cracking down on the people who defend human rights and young environmental activists,” the statement read. 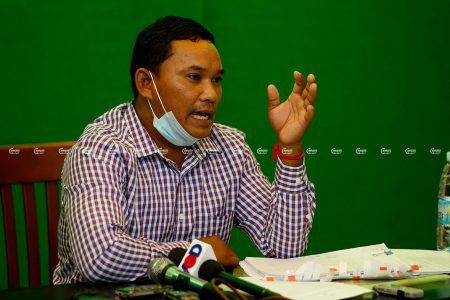