The Cambodia National Council for Children (CNCC) on Tuesday launched a five-year plan to prevent online sexual exploitation of children, a crime the government and advocates say has worsened amid the pandemic.

Vong Sauth, Minister of Social Affairs and executive director of the CNCC, said as technology has become more advanced, online sexual exploitation has become a critical threat to young children and adolescents in Cambodia especially during the COVID-19 pandemic.

“The purpose of this action plan is to bring together child protection actors in finding solutions to help children avoid becoming the victim of online abuse and finding legal justice for all those vulnerable children,” Sauth said.

A report released last year by World Vision Cambodia found 15 percent of children interviewed had been contacted by strangers on social media and 2 percent said they had been asked to share intimate pictures or videos.

Jalaa Abdelwahab, acting representative of UNICEF Cambodia, said that the situation in Cambodia reflects a global challenge. In 2020, he said, more than one million videos and images involving child sexual abuse were flagged on the International Association of Internet Hotlines (INHOPE), which allows anonymous public reporting of illegal online content. Three-quarters of the victims were between 3 and 13 years old.

“Girls remain at much higher risk of sexual abuse than boys. Ninety-three percent of the victims [globally] in 2020 were girls, up from 91 percent in 2019. However, both boys and girls are among the vulnerable to sexual abuse that should be addressed,” he said.

“Effective response to child sexual exploitation in Cambodia must bring together stakeholders into disciplinary and multi-disciplinary entities of all institutions responsible for child protection in the online environment including civil society and the private sector led by the government,” he said.

Interior Minister  Sar Kheng, echoed that statement, saying it is necessary for a range of agencies and groups to join hands to stop online child sexual exploitation.

“The Ministry has been aware of and paid attention to this issue by setting up the Cyber Crime Department since 2015 in order to address the online abuse despite the shortage of technical capacities and human resource,” Kheng said at the launch.

But many victims still say they have little inclination to report the abuse to the police. Stigma and fear, as well as a lack of sensitivity toward victims and impunity for perpetrators still keeps many survivors of sexual abuse silent, according to rights groups and victims.

For those who have been the victim of online sexual abuse, the effects linger long after the crime. One girl, who cannot be named for child protection reasons, told CamboJA that a man she didn’t know asked her to send explicit pictures through Facebook. He told her that if she refused to do so, he would track her down and hurt her.

“He acts like he knows me well. It made me feel so frightened at that time. He then starts asking for inappropriate pictures and says if I refuse, he will rape me. I literally do not know what to do but decide to block him on Facebook. Because of this, I now rarely go online,” she said. She said she never told her parents, or the police, out of a feeling of shame.

On June 29, the child protection NGO Action Pour Les Enfants (APLE) launched a campaign to educate the public about the harm caused by sharing images or videos of child sexual abuse, even when doing so for a seemingly good reason.

In a statement, APLE said its researchers evaluated 150 accounts that Facebook reported to the National Center for Missing and Exploited Children (NCMEC) for uploading child exploitation content between July 2020 and January 2021, and found that more than 75 percent did not exhibit malicious intent — with people often sharing the content out of outrage, but inadvertently spreading the abusive images wider while doing so.

Samleang Seila, country director of APLE, said Tuesday that he hopes the new action plan will help combat the spread of such illegal content.

“In the past, we saw that most cases related with child pornography production and distribution are through online and social media,” Seila said.

While 150 cases of online child sexual exploitation were reported to APLE last year, he said, the number is likely higher and has increased during the pandemic.

“It is a big concern to us personally,” Seila said. 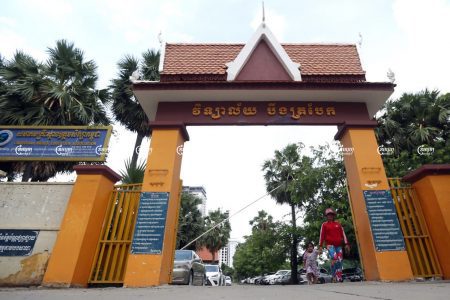