Hundreds of Phnom Penh residents, including a number of garment workers, protested Friday morning and Thursday night at two separate places in Meanchey district’s Stung Meanchey 2 commune, saying they were in desperate need of food as the area enters its fourth week of lockdown.

More than 100 villagers in Meanchey’s Phniet village gathered Friday morning at the barricades sealing off their road to demand food from the government.

“Please can the government help us because we are starving,” one woman could be heard yelling.

Phnom Penh has been under lockdown since April 2, but some red zones — particularly those in factory-dense areas — have been locked down since April 10, when infection rates began spiking among garment workers. While local authorities insist they have been providing food to hundreds of thousands of the capital’s most vulnerable residents, many continue to report not having received any sort of assistance.

Um Srey Khuoch, 25, said no one in her community has been given food since Phniet village was locked down on April 10, and no one is allowed to leave to buy food.

“I met with food shortage a week ago because I have only a small amount of rice left to cook, so I came out to protest to ask the government and the authorities to help us,” she said.

Srey Khuoch said that she knew residents in Stung Meanchey 1 and Stung Meanchey 3 communes had received food from the government, and she didn’t understand why no one in her village had been given support.

Dy Rath Khemrun, deputy Meanchey district governor met with the protesters, asking them to return home and promising they would be given aid immediately.

“Please villagers keep distancing and the village chief will go down to register now and I will distribute gifts today, so please all villagers return home first,” he said.

He said district authorities have distributed food aid to nearly 30,000 families, and apologized that it hadn’t reached Phniet village.

“Today, we are distributing gifts for 300 other families in Phniet village and then we will continue to distribute [food] for this area,” Rath Khemrun said. “Please all compatriots believe our authorities.”

He said that the authorities would bring food for another 1,500 families in Stung Meanchey 2 commune soon.

“Even if it is late at night, I will come at the right time and I will give you gifts at that time,” Rath Khemrun said.

Srey Khuoch said Friday night that authorities did come during the day and distributed food to her community.

“My family has not had rice since after Khmer New Year but we were being patient because we could borrow some rice from other villagers,” said Thit Veasna, 44. “But now we cannot be patient one more day because we have nothing left to eat.”

Veasna joined the protesters Thursday night and said Friday that the district governor and deputy district governor, as well as commune chief, went to intervene, promising to deliver food immediately. He said he and his neighbors received food Friday morning.

“I received a package of gifts including 25 kg of rice, one case of noodles, and canned fish, but it did not have fish sauce or soy sauce,” Veasna said. “With this rice, we can survive for one more week.”

Veasna added that he and other villagers do not intend to cause chaos or public disorder but “we are starving.”

The food shortages in the areas designated as red zones have become increasingly serious, particularly after the government announced the extension of the lockdown for another week, and many people living in these zones have called for help on social media.

Chak Sopheap, executive director at the Cambodian Center for Human Rights (CCHR), said she didn’t understand why food distribution was going so slowly, particularly when these needs had been well documented for weeks.

“Why did the authorities wait until the protesters came out to solve it and [only then] promised to prepare for them overnight or the next day? Since April 10, the authorities did not know about this problem or obstacles?” she said, adding that she didn’t know if the slow response was due to budget issues or logistics challenges or something else.

“I do not want to put more burden on the authorities, but we should discuss all the issues that are obstacles to come up with a targeted solution and respond to the challenges of the people,” said Sopheap.

Sopheap, who lives in Stung Meanchey 2, noted that distribution had been wildly uneven, with some districts providing food to those in need on a daily basis. More should be done, she said, to ensure even access.

“Due to the allocation of budget, including budget or food, it is necessary to respond to the blockade measures for sub-national level inequality or resources in different districts, which makes some districts unable to respond in time,” said Sopheap.

She added that the government had yet to coordinate with food providers, from small charities or wealthy individuals, on up to large groups. Thus far, only the Cambodian Red Cross has been actively working with the government on food distribution — but not inside Phnom Penh.

“Authorities should make it possible for them to get involved, as the situation and the outcome may be in the next one to three months, when the state should have a clear plan for responding to health hazards and their impacts, including the economy for the nation’s and citizens’ lives,” said Sopheap.

Uy Sam Ath, director of disaster response at Cambodian Red Cross, said CRC has been assisting the government, but hasn’t done food delivery in Phnom Penh “because the government and the authorities are doing it and we cannot go to step on each other’s work.” He added that for safety’s sake, “we could not order our volunteers, youths, and officials to face danger.” The group, however, is collecting information on who has died or suffered from COVID-19 and will provide support in the future, he said.

It is unclear whether large organizations like WFP would get involved in food distribution. Several emails sent by CamboJA to the UN food assistance branch this week went unanswered.

Meanwhile, Phnom Penh city hall issued a directive on April 29 to put four villages in two communes in Tuol Kork district as dark yellow zones and red zones for six days starting from midnight on April 30. Village 17 and village 22 in Boeng Kak 2 commune have been made dark yellow zones. Village 23 in Boeng Kak 2 commune and village 10 in Boeng Salang commune have been made red zones.

On Friday, the Ministry of Health said it recorded 760 new cases and that 93 people have died of COVID-19 — all from the latest outbreak. Health officials have recorded 12,850 new infections since the February 20 community event, with a total overall case count of 13,402 cases since the start of the pandemic in early 2020. 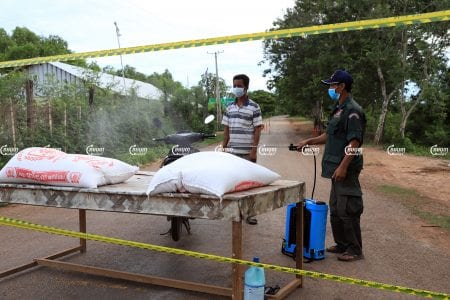 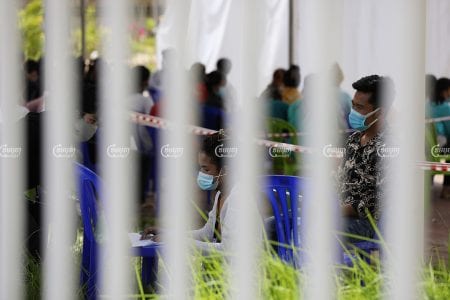 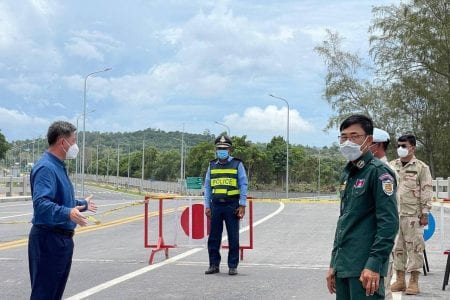