Environmental activists and locals expressed concern this week over ongoing illegal logging in community forests in Sambour and Chhlong districts.

A group from Cambodia Youth Network joined with community members in a two-day patrol last week in a pair of protected community forests and recorded more than 20 cases of illegal logging and land clearance.

The evergreen and semi-dense forest spans more than 3,000 hectares and in 2008 was granted to two communities for conservation.

Heng Kimhong, a research and advocacy manager at Cambodia Youth Network, said that logging continues due to corruption and a lack of enforcement by authorities.

“We have found 22 cases of cutting trees, and the cut logs measure between 15 to 120 centimeters [diameter],” he said.

“Slow intervention and collusion of local authorities are the keys to logging and deforestation,” Kimhong said.

Kimhong said that despite the protected status of the forest, the land is being cleared by local villagers to live on and cultivate. Other parts of Kratie’s forests have been granted to private firms as economic land concessions making the community forest especially important, he said.

Kimhong called on the relevant authorities, especially the forestry administration, to strengthen its enforcement of existing laws and prevent illegal logging and community land clearance.

Som Saray, chief of the 1,600-hectare Veal Kanseng Community Forest in Chhlong district, joined the patrol and said he is concerned about a further loss of forest cover, which brings benefits to the local community and provides crucial wildlife habitat.

“They [loggers] had entered to cut trees at nighttime,” he said. Though he goes on patrols every month, Saray said he saw more illegal logging last week than he had previously

He said he believes that many of the loggers are from a neighboring village and that they don’t understand that the forest is protected for the sake of the larger community.

“It has affected the shelter of rare wildlife animals like the Banteng wild cattle, as well as community incomes if forest continues to be lost,” Saray said, adding that approximately 100 families rely on resin trees and other forest products to support their livelihoods.

“The land clearance of community forest involves local villagers who have occupied it for cultivating,” Phun said.

“The land has been occupied, we will take it back,” he said. “We are concerned about a further loss of forest if there is no strict measure to prevent the occupation of community forest land.”

“Some villagers’ rice paddy is located near the community forest, so they had occupied it to expand their land size,” he explained.

“I think that any cutting of trees is done by local villagers because outsiders dare not to come because forest land is controlled by the community,” he said.

Phany said he would look into the matter but declined to comment further. 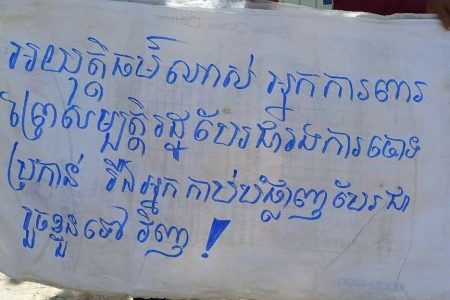