NGOs call for changes to draft law on access to information

A group of civil society organizations on September 28 called on the government to revise the draft Law on Access to Information, taking particular issue with an article that says confidential information can be withheld in certain unspecified cases, while the Information Ministry has maintained that the draft will move ahead without further revision.

They have asked for the removal of Article 20.7, which says that public institutions may withhold “other confidential information as stipulated in the prohibition provisions,” which the NGOs said is “overly broad and lacks specificity.”

They also called for the deletion of Article 15.4, which requires 40 days to pass before a repeat request can be made for a piece of recently released information, as well as revisions to six more articles, including Article 25, which is meant to protect whistleblowers.

CamboJA Executive Director Nop Vy said at the event that he supported the majority of Article 20, which details how confidential information can be obtained, but that the phrasing of Section 7 would allow officials to arbitrarily deny information requests.

“We are worried about Article 20.7… and about what type of confidential information will be included in the prohibitive provisions as we are journalists and a citizen can’t ask for that information,” Vy said.

“The details of the draft law are just laying out the methods of gaining access to information,” he said.

“It also means that public officials who are working in institutions, they have the right to reject [information requests] by using individual sections of the law to their benefit,” Vy added.

He called on the government to open discussion of the draft and consider the input of civil society groups to ensure the needs of the public are met.

TI Cambodia Director Pech Pisey said the Access Information law is important because it will give citizens the power to urge the government to be accountable and transparent when it comes to providing services and eliminating corruption.

“When people are able to access more information, they can partake in more social work,” he said. “Anti-corruption campaigns won’t work effectively if there is no standard in the Access to Information Law.”

He also said the current phrasing of Article 25 would not protect whistleblowers who reveal information on crimes, and would instead only protect those who file a complaint to a public institution or court over misconduct by an officer in charge of information.

“We encourage that the scope of the draft law be expanded to protect all persons who reveal any form of information on wrongdoing or crimes that have been committed by public officials,” he said.

However, Information Ministry spokesman Meas Sophorn said by telephone that the draft law would soon be sent to the Council of Ministers, and that the concerns raised by NGOs would not be an obstacle to its ratification.

He said the ministry has been in discussion with the civil society groups over the law for many years and had previously agreed on all points in technical working group meetings.

“Even now they are still raising issues to make their work attractive to continue to receive funding so they can work on the issue,” he said. “What they have raised is not different to what was discussed at the technical working groups where we exchanged opinions many times.”

He said the Law on Access to Information would guarantee all citizens their right to information from public institutions, except confidential information.

Sophorn said that the draft Law on Access to Information had already been finalized at technical group and inter-ministerial discussions and is waiting for a review from the Justice Ministry regarding penalties before it would be forwarded to the Council Ministers.

In a statement at the event to mark the International Day for Universal Access to Information, Unesco country representative Sardar Umar Alam said that he expected the law would be adopted soon and would be in line with international standards of freedoms of expression.

“The government must commit to the common good by developing the innovative use of digital technologies for building resilient information infrastructures… and enable accurate analysis of issues in the public interest,” he said.

She said that while adapting to new technology may be necessary, standards should not be lowered.

“The same rights that people have offline must also be protected online, particularly with regard to the freedom of expression,” Ottosson said.

“In this context, it should be mentioned that Sweden is concerned about reports of intimidation and harassment in order to limit the enjoyment of freedom of expression as well as the freedom of association in Cambodia,” she said.

Also during the event, Sophorn pointed out that currently, only that most other Asean countries do not already have a law on access to information.

The government considers the Access to Information law a significant factor in promoting multiple-party democracy and views it as a way to promote the rights of citizens in joining in development with the government, he added.

In July, a joint report by the Cambodian Center for Human Rights, Adhoc, and the Solidarity Center analyzing the state of fundamental freedoms in Cambodia showed the ongoing restriction of the freedom of association and freedom of expression between April 2019 and March 2020.

The report documented 245 restrictions and 103 violations of freedom of expression, including 166 summonses and 99 arrests for the exercise of free speech.

“Online dissent and criticism are consistently curtailed,” it said. “Almost half of all recorded violations of freedom of expression related to online expression, including 48 arrests.” 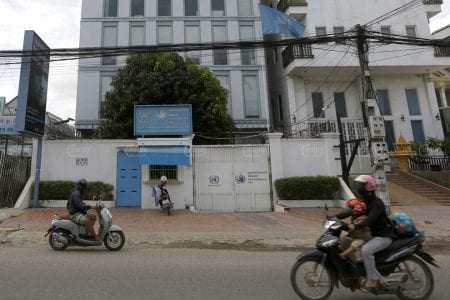