Thousands of households and farmland hit by flooding in northwest

Around 4,000 households have been affected by flooding in northwest Cambodia following weeks of heavy rainfall and flooding that has intensified over the past few days, impacting thousands of hectares of rice paddies, roads and other infrastructure and forcing thousands of families to be evacuated from their homes.

The Ministry of Water Resources and Meteorology issued a statement last week warning that the KOMPASU storm, the eighteenth typhoon of the year, would pass through the South China Sea and hit Cambodia with wind and increased rainfall.

“This flood is caused by heavy rains in some provinces along the Cambodia-Thailand borders,” said National Committee for Disaster Management (NCDM) spokesman Khun Sokha. The statement said that the rain seems to be decreasing in Battambang and Banteay Meanchey provinces compared to last week.

Sokha said that the Water Resources Ministry has informed citizens since October 13 that Cambodia will be impacted by storms caused by heavy rain in some provinces and affecting citizens in Banteay Meanchey and Battambang provinces.

“Although rain is decreasing, the water level seems to be declining,” he said. “But it’s predicted to continue until 23 October, so we have to be ready to face the floods.”

Sokha said that compared to this time last year, when Cambodia experienced severe flooding across much of the country, only a few provinces had been affected by the rainfall.

Banteay Meanchey provincial Department of Information director Sek Sohkom told CamboJA that 2,000 families had been evacuated to temporary shelters last week in the province, although he noted that some villagers have been gradually returning to their homes this week. In addition, he said, 50 schools across nine districts have been suspended due to flooding.

Sohkom added that while the water level has been increasing across the province these past few days, it was still one meter lower compared to October last year. Half of the 2,000 hectares of rice fields in the province have been damaged by the flooding.

“Citizens who live along the river have experienced heavy rain, so they are well prepared to face it. However, it’s still a challenge and impacts people,” he said.

“It is affecting their animals and people, especially young children that love to swim, so the provincial administration is always alerting people through social media to prevent death,” he said.

He said that there are 48 roads with a combined length of 117.940 out of a total of 437.486 meters as well as three drainage systems that have been damaged by flooding.

“This flood is breaking the roads into different pieces of sidewalk, and some people cannot travel,” he said. “It doesn’t mean the whole road is broken, we just totalled the length of those pieces.”

Battambang provincial spokesman Soeum Bunrith said that the floods have affected 14 districts. Across those districts, a total of 2,460 households, about 232 hectares of agricultural products, 1,300 hectares of farmland, 13 hectares of rice harvesting, 16,100 meters of red dirt roads and 11,200 meters of paved roads were impacted by the heavy rains.

The water level of Stung Sangke River in Battambang City rose to a height of 14 meters — just half a meter below its emergency level — before decreasing to 12.10 meters as of 6.30pm on October 17.

“Therefore, the flood situation over the past three days did not seriously affect the people living along the river and other crops, but did affect the infrastructure, including red gravel roads and asphalt roads,” Bunrith said.

Lam Seab, a 62-year-old fisherman in Banteay Meanchey province’s Sambour commune, said that he has not been able to fish due to the storms.

“I cannot make income from fishing for these few weeks, because of the heavy rain, strong wind, and the waves are big enough to sink our boat. I cannot take the risk of fishing,” he said.

Seab said that the flood has seriously impacted his livelihood.

“It is difficult to go out, and I cannot do other jobs to survive,” he said.

“I don’t know how to find any other income because I have been a fisherman and farmer since I grew up, I rely only on fishing and growing rice in the dry season because this village cannot grow rice in the rainy season, rain and flood will destroy our field.” 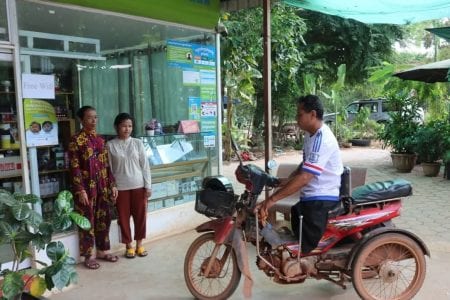