Three online news journalists from Kratie province were arrested and charged with extortion this week for allegedly demanding money in return for holding back a story about illegal land clearing.

A court document shows that three journalists were arrested from November 30 to December 2, and charged Articles 363, 377, 378 for extortion and fraud. The three journalists are: Hout Davy, publisher of Samleng Ekreach; Khoem Phally, Kon Khmer Macha Proteh; and His Him with Investigator Media.

Police and court officials were not forthcoming with details of the alleged crimes.

Tuv Vuth Then, a Kratie court spokesperson, said the three journalists had been sent to pre-trial detention and declined to comment further.

Keo Socheat, head of the prosecutor’s office at the court, said the court was conducting an investigation into who was involved in the alleged extortion.

Chea Lyheang, president of the Federation of Cambodia-ASEAN Journalists, said he had visited Kratie to investigate the arrests. According to his investigation, a group of six journalists had asked a local businessman for $700 to not publish a story about illegal clearing of land in Chet Borei district’s Thmey commune.

But, the businessman was willing to pay only $300, Lyheang said, which the journalists agreed to. The payment was supposed to happen at a restaurant but Phally and Davy did not enter the premises after seeing police officials nearby. They were later arrested on November 30.

“It is our [journalists] who were careless and they got into their trap. In fact, those journalists have committed the extortion,” Lyheang said.

But he said the police and authorities should investigate the land clearing claim, alleging that local businesspersons and government officials were involved in such activities and attempted to protect themselves by framing the journalists.

“I would like to say that land located in Thmey commune is not forest land or land in a wildlife sanctuary,” he said.

He said there were ownership details for any cleared land, but refused to provide these details.

Nop Vy, executive director at Cambodian Journalists Alliance, said the authorities and police officials should investigate all aspects of the alleged crime and not only focus on the journalists.

“I request the police officials to thoroughly investigate all the relevant parties and to not only put the blame on the journalists. Other people might have been involved committing offenses who are free,” he said.

He added that journalists should not set aside their ethics and make promises to not publish sensitive stories in return for monetary payments.

Ben Lynath, Kratie’s deputy provincial governor, said he was unaware of the case and Meas Sophorn, spokesperson for the Information Ministry, could not be reached for comment. 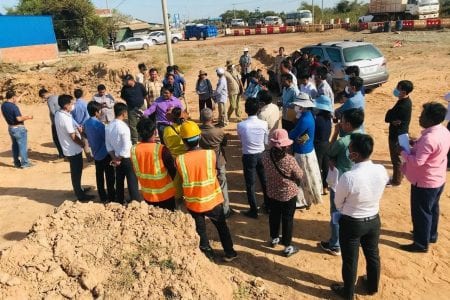