US ambassador urges more transparency into Ream Naval Base, and the restoration of human rights

The US ambassador to Cambodia, Patrick Murphy said the US continues to have concerns over China’s possible involvement at Ream Naval Base in Sihanoukville and urged the Cambodian government to offer more transparency.

In an exclusive interview with CamboJA, Murphy spoke about a wide range of issues, including regional security, and concerns over a democratic backslide.

On June 11, the US military attaché visited Ream Naval Base at the invitation of Cambodian officials. But, said Murphy, it quickly “became very clear during the visit that [the attaché] was not being allowed full access. We backed the request to return to the base with the expectation of full access so now the request is with the authority,” he said. “And what I would offer, if Cambodia has nothing to hide then it should allow full access for all defense attachés from all countries.”

Murphy referred to a pledge made by Prime Minister Hun Sen, who said last year that the base would be opened to all Cambodian partners.

“We like to see that … but if the authority is going to deny access …that suggests maybe they have something to hide. I pose this question to authorities: why not offer full access to implement the prime minister’s commitment?”

Citing anonymous US sources, the Wall Street Journal and other publications reported in 2019 that there was a secret agreement between Chinese and Cambodian officials to allow Chinese military access to the base in exchange for infrastructure support. Cambodian military officials have said that China is indeed helping with construction at the base, but denied that the country has any military involvement.

Murphy said regularly, ongoing access to the base would dispel American concerns.

“This is not the US’s accusation, this is the acknowledgment by Cambodian military officials that China is helping and assisting at Ream Naval Base. There has been ample reporting in the public from independent media about the concern of the Chinese military presence at Ream,” he said.

Murphy stressed that any Chinese military presence at Ream would contravene the country’s own constitution.

“It would cause challenges and concerns with Cambodia’s neighbors and others among the ASEAN collective. And it would certainly be a concern for the international security of the US. We have allies, we have partners, we have freedom of navigation in commerce to protect in the region,” he said. “And Chinese military presence as we have seen elsewhere around the world poses a risk to a country like Cambodia…so it is natural that we have conversations about this, and we encourage Cambodia to take every measure possible to protect its sovereignty and independence. That is fundamentally what the Ream Naval Base issue boils down to.”

Chhum Socheat, Ministry of Defense spokesman could not be reached for comment while Mey Dina, spokesman for Ream Naval Base refused to comment.

However, a statement from the Ministry of Defense previously disputed the US account of the trip, saying that the attaché was given access to locations agreed to ahead of time and that only upon arrival did he demand to enter another area. In light of the irregularity concerning protocol, and noting Cambodia’s sovereignty and right to retain classified military areas, officials refused his request, said the statement.

“The Ministry of Defense regards the reaction of the US embassy as striving to create new problems and distorting the facts which could further negatively impact the defense relationship between the two countries,” it said. “[We] call for the US Embassy to cease the creation of new scenarios which bring about negativity and insist the US respect Cambodia’s sovereignty and military classification.”

Pa Chanroeun, president of the Cambodian Institute for Democracy, said that Cambodia must be prepared for how geopolitical tensions between Western and China may impact the country.

“We see that the G7 summit has already made clear the challenge between China and Western countries, so Cambodia could become a rival territory for power​ that we call a new form of cold war,” he said. “And small countries like Cambodia will be strongly affected by this geopolitical competition.”

Murphy said that the US focuses on many aspects in relationships between the two countries, including economic relations, cooperation on international crimes, and issues related to the Mekong.

But he said the US takes particular interest in democracy and human rights, and is deeply concerned by the current situation. The country’s only viable opposition party, the Cambodia National Rescue Party, was dissolved in 2017, with arrests and charges for its top leaders and many members.

Murphy noted that Cambodia in the past demonstrated its commitment to democracy through its development of a strong constitution, free and fair elections with high voter turnout, a vibrant civil society, and open media.

However, he said, the last few years have seen a serious setback, causing concern for the US and affecting the relationship between the two countries.

“The 2018 parliamentary election was missing the leading opposition party. It was also disappointing to see the commune election in 2017 in which all those seats were taken away from the CNRP and redistributed to the governing party and a few others. We would like to see Cambodia restore what it demonstrated it was capable of doing in the past,” he said. “It is a disappointment to see that party [CNRP] excluded from the 2018 election. Furthermore, the leaders were arrested, detained and many of the members and supporters have faced a similar fate in the intervening years.”

Murphy said the case against CNRP leader Kem Sokha — who was arrested on treason charges in 2017 and though was released has yet to be tried — is based on politically motivated charges. “We hope that his voice can be heard, and he can be allowed to participate in political life in Cambodia like others,” Murphy said.

“We hope to see the political detainees released and regain their freedom and have the ability to participate in Cambodian political life.”

“We are promoting participation in elections by all Cambodian people,” he said. “We want to establish the country of civil society, not the country of military and authoritarianism.”

Siphan accused some NGOs and rights groups in Cambodia of acting as the courts by calling for the release of political prisoners or determining those charged as not guilty. “Human right groups should help strengthen and educate people to be responsible before law. And [some] groups still rely on foreigners for help and rely on foreign pressure to be put on Cambodia,” he said.

But, said Chanroeun from the Cambodian Institute for Democracy, foreign countries like the US maintain significant power through their export markets and shouldn’t be ignored so readily.

“When the one huge opposition party in the country was kicked off of the political stage and all seats were taken to redistribute with others, it is [taking us] off the path of democracy,” he said. “The situation of human rights and democracy progress is a concern, it is on the brink of death.”

Cambodia is set to hold a commune election next year and general election in 2023. Murphy said he hoped those elections would be freer than the last set. “What I can say is strongly encouraging as a friend of Cambodia as a supporter of Cambodian people that any electoral process here is open and competitive, transparent, accessible, allowing free and independent voices to participate and express their view and contest. That is what we hope for in the future.” Murphy said.

He said the US was also keeping close watch on the situation regarding press freedom, which has been worsening in recent years.

“When you look at the treatment of some journalists who have been detained or harassed, we think that is a trouble for democracy here and we would like to see that reversed,” Murphy said.

“There are two formers Radio Free Asia journalists, who have been subjected to a very unfair court process. We would like to see their freedom restored and all journalists to have their voice.”

“We need information, we need to know how the government is doing and responding to the public health needs of the population, including managing the outbreak.”

He said the US has also been in discussions over Cambodia’s controversial National Internet Gateway.

”As Cambodia navigates the digital age, it is important to do so in the way that adheres to international standards when it comes to freedom of expression and freedom of commerce,” he said.  “What we have encouraged the Cambodian authorities to do is to consult with the private sector to balance these challenges.” 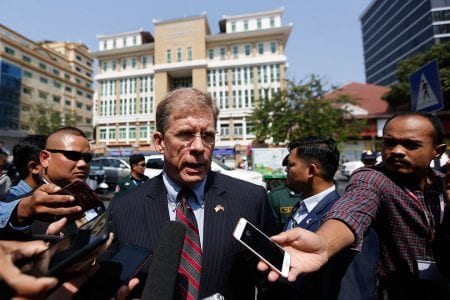