High school students Rithy Leakena and Bun Theath Panharith are back at a Takhmao café studying for the national grade 12 examination next month. While Leakena is busy finishing a physics exercise, Panharith is drafting a Khmer literature essay.

The table in front of them resembles a school desk; handwritten notes, printed copies of study material and their smartphones are strewn on the table. The students are looking forward to taking the national examination, which has been delayed because of the COVID-19 pandemic.

“I am very excited. We have only one month and seven days until the exam day,” Theath Panharith said.

The grade 12 examination, which decides the future course of study for students entering university, was scheduled to be conducted in August. But, the Cambodian government had closed all schools since March, when the number of novel coronavirus cases started to increase in the country.

Schools had to quickly pivot to online coursework, a task that was easier for urban private schools. Public school students had to wait for coursework to be formatted for broadcast on Facebook and state-run TVK.

In September and October, as the COVID-19 case count steadied, the government allowed schools to reopen as long as they could implement relevant health and safety measures. Students had just started returning to their classrooms when in early November they were told they had to return to online learning.

A visiting Hungarian minister tested positive for the virus shortly after completing a state visit to Cambodia on November 3. The minister had interacted with a number of government officials, including parents of students, leading to the closure of schools for two weeks in Phnom Penh and Kandal province.

The government asked schools to restart online learning till it was ascertained there was no threat of community transmission. But, parents, teachers and advocates have raised concerns over the quality of online education, especially in rural areas where access to smartphones, laptops and the internet is low.

Heng Meng Leap, 13, who is a seventh-grade student at Hun Sen Sereypheap High School in Kandal province, was despondent when she heard that schools had been closed again and that she would have to resume online classes.

“When I arrived home from school in the afternoon, I heard about it. I felt I didn’t want to study anymore,” she said.

Meng Leap started the academic year with around 60 students. But as her school transitioned to online learning in March and April, no more than 50 percent of students logged in to join the Zoom and Telegram study sessions.

The 13-year-old student offered to study with one of her classmates who did not have a personal smartphone at home.

“At first it was very difficult because some of my classmates did not have smartphones,” Meng Leap said. “So, there were less than 30 students attending the online class.”

She was concerned other friends would still be unable to access the online classes or did not know how to register and join Zoom calls.

Uk Chhayavy, the president of the Cambodian Independent Teacher Association, said that while the COVID-19 pandemic had affected all students, those in rural areas were especially vulnerable to falling behind.

“I visited some provinces and met with students who said they do not have phones or TVs,” she said. “Sometimes they try to borrow their relatives’ phone and it costs them a lot of money [to access the internet].”

An Education Ministry spokesperson, Ros Soveacha, said officials had decided to go ahead with grade 12 and 9 examinations next month despite the recent disruption to the school year.

He said that it was possible for students to access study material from the TVK broadcasts and that students could meet at each other’s homes if they did not have a smartphone or TV.

“The students’ families who do not have a TV can study together with their neighbors, but there should be less than 10 people and they should maintain social distancing” he said in a Telegram message.

A spokesperson for the United Nations Educational, Scientific and Cultural Organization (UNESCO) told CamboJA that Education Ministry data from March showed that an estimated 500,000 students from nearly 800 schools had been affected by the recent closure.

Back at the Takhmao café, twelfth-grader Leakena said she wants to study English literature and business administration if she passes next month’s examination. She too was having difficulty focusing during online classes, some of which were attended by 500 students.

“And we are scared to ask questions because we are afraid that we will disturb others,” she said. “In a classroom, I could ask my teacher quickly.”

Prime Minister Hun Sen on Wednesday indicated that if the last round of testing, for people in direct or indirect contact with the Hungarian minister, were all negative, the Ministry of Education could consider reopening schools, giving students a precious few weeks with their teachers to complete preparations for the national exam. 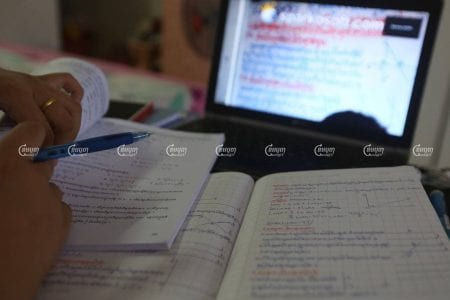