Prime Minister Hun Sen on Sunday issued a directive to end the issuing of online gambling licenses in the country, saying the industry had been exploited by foreign criminals.

“The Royal Government of Cambodia will stop the issuance of online gambling policy and licenses, both within and outside of the Kingdom of Cambodia, from the date of signing this directive,” the directive said.

“Some foreign criminals have taken refuge in the form of this gambling to cheat and extort money from victims, domestic and abroad, which affects security, public order and social order,” it said.

The directive also said that the Finance Ministry, which is responsible for issuing the licenses, would not renew those that expire.

Preah Sihanouk province, on the country’s southern coast, has seen a spike in the development of Chinese casinos in recent years, many of which are owned by Chinese nationals and allow online betting.

In a somewhat unique arrangement, foreigners who hold accounts at the casinos in Cambodia can subsequently make bets via the internet from abroad while viewing a live stream of the casino tables. Though popular, the scheme has drawn caution as potentially being easy to exploit for money laundering purposes.

The UN’s Office on Drugs and Crime warned in July that casinos around the country were being used to launder organized crime revenues.

The number of casino licensees increased more than 50 percent last year to 150, with a further 13 licenses granted during the first four months of this year. About 90 of the licensees are located in Sihanoukville, authorities have said.

Soeng Senkaruna, senior investigator at rights group Adhoc, welcomed the government’s move to stop issuing online gambling licenses, but said it was yet to be seen whether it would be effective.

“It is a good thing to do whatever it takes to stop those foreigners from using our country to commit the crime of extorting money from people. We also don’t want the online gambling to have an influence on our people,” Senkaruna said.

“We will wait and monitor how effective the enforcement will be, because there have been many sub-decrees and directives by the royal government but the enforcement by officials hasn’t yet been effective,” Senkaruna added. 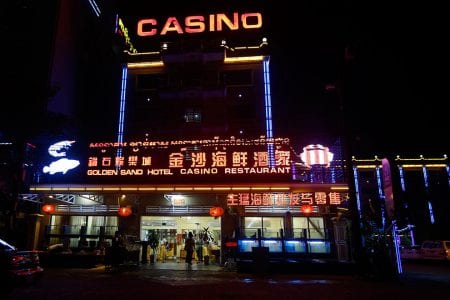 Online gambling will be eliminated from Jan 1: police chief