Thirty-four families living along National Road 5 in Kampong Chhnang province have called for the government to reconsider the building of a roadside weigh station that blocks the entrance to their homes.

The families prevented government contractors who came to measure the site on Friday and then sent a letter to Prime Minister Hun Sen asking for intervention, claiming that the weigh station – funded by the Japanese International Cooperation Agency (JICA) – encroached on their land and cut them off from their livelihoods.

Ven Reaksmey, a representative for the families, said that they were surprised when a working group arrived to demarcate the land last week, after district and provincial authorities agreed to reconsider the project in August.

“We are here living and doing business. They can move to another place where it does not affect the lives of people,” he said, adding that they would not settle for any compensation.

“They told us that after they build the station, they will build a new road six meters wide for the people but it is still not acceptable.”

Reaksmey said that the station will be about 500 meters long, across the front of the homes of and blocking road access for 34 families in Ta Kol village, Peani commune.

The weigh station is part of a $600 million, JICA-funded renovation of National Road 5, and is set to be built at kilometer post number 48 in Kompong Tralach district, according to project documents from the Ministry of Public Works and Transport.

Pal Chandara, a spokesman for the Ministry of Public Work and Transport, said that minister Sun Chanthol had received the complaint and the families’ complaint but was yet to fully investigate.

“We understand that building the station in front of their property affects them, they are not happy because it will affect their daily business,” he said. “We will discuss the issue this week, as the document is in the minister’s hands.”

A JICA representative said that issues arising from projects it funded were the responsibility of the Cambodian government and referred questions there.

The National Road 5 renovation included upgrades from Prek Kdam in Kandal province to Thlea Ma’am in Poipet city that would improve connectivity between Phnom Penh and the Thai border, according to JICA’s website.

The project also includes new bypasses in Kampong Chhnang and Oudong and had passed JICA’s own guidelines for social and environmental considerations.

Reaksmey said that the families would meet again next week and discuss taking their complaint to Phnom Penh, where they would protest in front of the prime minister’s home and the Japanese Embassy.

Sam Chankea, provincial coordinator of local rights group Adhoc, said that, with a more careful study of the impacts of the project, the issue could have been avoided.

“After the study, they will find ways to mitigate the impact and they should not continue to develop without solution because it abuses the rights of property owners,” he said.

“It contrasts with the government’s development policy because they did not conduct a detailed study of the impact, they did not inform the people about the project, they abuse our rights to life,” he said. 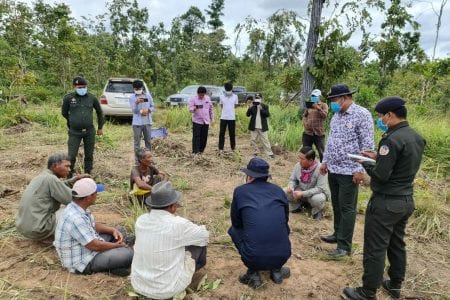