International tourists may officially be allowed to return to Cambodia, but workers in the hospitality sector say a full economic recovery still feels far away.

Employees and union leaders who spoke to CamboJA said even some of the country’s major luxury brands have enacted serious staffing cuts to stay afloat during these extended lean times. What’s more, the many workers employed by companies that serve the hospitality sector, such as the cleaning and hygiene agency HCC Group, have also found themselves waiting for tourists to return to boost demand for their services.

HCC worker Sun Kimhorn, 39, said he mainly cleaned floors at the Phnom Penh International Airport. But as arrivals collapsed, his company suspended many staff members while others quit in search of more stable, lucrative work. His own salary plunged from a full-time wage of $200 per month to just about $60 for a 10-day monthly schedule.

“This amount wasn’t enough to support us, so I had to borrow some from my relatives,” Kimhorn said, adding that his wife is staying home to take care of their daughter and baby son. “I was really depressed while unemployed with low income. I couldn’t sleep well and still think about what I can do to find money.”

Now, as the country reopens, Kimhorn says he’s back up to a 20-day schedule and $120 monthly salary. Things are getting better, but he’s still struggling to meet his family’s financial needs.

The Cambodian government announced a reopening to foreign tourists on November 1, officially dropping quarantine requirements for those entering the country. Now, incoming tourists only need to provide proof of vaccination and a negative PCR test for COVID-19 taken within 72 hours of their departure from their country of origin. Upon arrival, tourists must then take a rapid test at their port of entry. Once they have a negative result, they’re free to travel through Cambodia.

The kingdom’s reopening is one of the most notable in Southeast Asia, but Kimhorn is still far from alone in his struggle for more hours and better pay. Many hospitality businesses that once employed Cambodians have disappeared altogether.

Kim Serey Rath, director of the Tourism Ministry’s department of tourist accommodations, told CamboJA that about 40% of the country’s hotels and guest houses had closed during the pandemic. However, about 80% of those that closed now seem to be reopening with the sector as a whole.

“It was really helpful for tourism when the government announced it would reopen,” Serey Rath said. “When business can operate, staff have a salary with stable jobs.”

For the past two years, many hospitality workers who weren’t laid off outright have had to accept reduced hours from their employers. Union deputies representing the staff at Raffle Royal hotels and Sofitel, as well as the national Cambodia Tourism Worker’s Union Federation (CTWUF), said these reductions have become the norm across the sector.

CTWUF President Touch Kosal said hotels that suspend jobs have to provide workers with $40 as part of a program supported by the Labour Ministry. But even some long-time staff have still been dismissed without any compensation, while others still working in hotels may have to make due with only 50% of their usual salary.

“Some service sectors are still suspended even though hotels have reopened, so the main salary and service charges are not too much because there aren’t many customers yet,” Kosal said, adding that service workers are bearing much of the hardship of the continued slump.

“I am upset to hear their complaints. Some of the staff changed to work as a construction worker or tuk tuk driver to solve their daily expenses and pay off bank debt, and some sold their property.”

Still, Kosal said the slow resumption of the international tourist sector in Cambodia has at least taken steps in the right direction.

“I’m really happy to see the government reopen the country so that the service sector can go back to normal and staff can have jobs with proper income. I hope it will improve from day to day,” he said.

Still, it remains to be seen when the flow of tourists will return to pre-pandemic levels.

“We used to get 3,000,000 foreign tourists every year to visit Siem Reap,” Sivlin said, explaining that the loss of that volume has had a mass effect on the economy. “Almost 60,000 people who work in the tourism sector have had bad impacts, such as in the areas of transportation, accommodation, food and indirect benefits. And [though] 3,500 locations closed, the pushing of local tourism led to about 700 places operating again.”

Even still, the employees of many hotels that stayed open throughout the worst of the pandemic faced steep cuts to their income even as they kept their jobs.

So Savon, 48, a representative of the workers union of Raffle Royal, said the luxury hotel suspended staff and reduced hours to pay others about 50% of their usual salary. The hotel also asked about 60 staff members to voluntarily resign with compensation at the beginning of the year.

Though the hotel is doing some business by renting space to customers to conduct meetings and seminars, it’s not yet enough to fully recover.

“We used to earn a lot of money every month and not spend [much], now we have less and the need is greater, as the costs of water and electricity are all higher,” Savon said, adding that many employees have struggled to meet their living expenses while paying off debts.

Phat Saruon, the president of the Sofitel workers’ union, reported a similar situation at his hotel, where 53 employees were previously laid off due to low demand during the pandemic. Those who have remained working say their duties have increased while pay and hours have fallen.

“I always think about how to find money to pay [debts] and support my family with little savings and reduced spending. It’s high pressure and my wife cannot work because she has to take care of my children,” he said.

Still, the national reopening seems to show signs of recovery, Saruon said, adding that he’s extra money through service charges at the hotel. As demand increases, he’s hoping things will continue to improve.

But the industry isn’t yet in the clear, and the rise of the new omicron variant of COVID-19 has left other countries reconsidering moves to reopen international travel.

For workers like Kimhorn of HCC, all they can do is wait and see what comes next.

“I am really concerned that the new omicron variant will spread and affect my work,” he said. 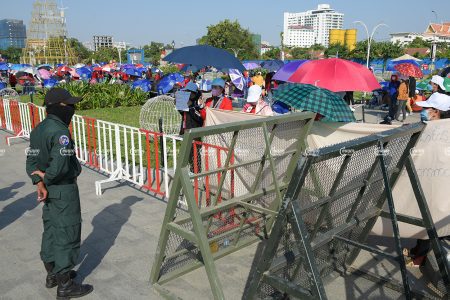