NagaWorld staff members say they will continue to strike lawfully and peacefully as they have since Saturday morning until the casino giant agrees to a solution they can accept for the 365 laid-off workers demanding to be reinstated after this year’s mass labor cut.

City Hall officials also confirmed they will seek a solution in the dispute between the company and staff, saying they hold a meeting with concerned parties on Tuesday at City Hall.

Koeun Ratha, 32, who had been working as a dealer at NagaWorld for nearly 10 years, joined the strike Monday morning, hoping the company will offer a proper solution soon. She added that she’s joining the strike to demand a solution for all staff members, not for personal gain.

“We go to [strike] for everyone, and no one forces us to do so,” she said.

On Sunday, she recalled, the authorities prevented some protesters from going to the toilet by not allowing them to return to the strike if they left. She said she could not accept the action of authorities as the dispute is between the company and the staff, questioning why the authorities were putting pressure on the workers.

As NagaWorld staff continue their now four-day strike, authorities have set up barricades and anti-strike equipment near the strikers. The Phnom Penh Municipal Court also issued a statement on December 16 declaring the strike is illegal.

NagaWorld holds the monopoly on casino licensing for Phnom Penh and last year raked in $869 million in gross gaming revenues, despite the pandemic. In 2019, the casino-resort pulled in gaming revenues of $1.7 billion.

Another dealer, Non Manet, 30, echoed Ratha in calling out the pressure from authorities. NagaWorld had violated the staff’s rights under the labor law, Manet said, so the ongoing strike is neither illegal nor against the government.

“We are going to strike peacefully, we are not going to protest violently or destroy someone’s property,” Manet said, adding that the public order would be unaffected by the action.

Municipal deputy governor Keut Chhe said City Hall has told the staff that striking is not a solution unless they join negotiations, which he said would happen Tuesday morning.

“City Hall does not want our people to go on strike illegally and we requested them to meet and find a solution rather than go on strike without respecting the law on peaceful demonstration,” Chhe said.

NagaWorld management had refused to negotiate with the union, the Labor Rights Supported Union of NagaWorld Employees (LRSU), throughout the mass layoff of 1,329 staff members beginning in April. About half of those laid off were union members, including most of the LRSU top leadership, and the cut represented about one-sixth of the former total workforce of about 8,000. The LRSU had about 4,500 members at NagaWorld before the layoff and has been an effective bargaining unit at a time when Cambodia’s labor movement has been in decline.

A union statement issued Saturday said NagaWorld’s actions over the past year have been intended to silence the voice of the union and other employees.

Khieu Savuth, deputy director of the Labour Ministry’s disputes department, could not be reached for comment.

“Not just at NagaWorld, but every workplace should have union representatives because [they] are like lawyers who protect other staff, so we have power to negotiate and demand our benefits from employers,” she said.

The ministry has told the strikers to disperse the strike but has not given any information about possible solutions. Monika rejected the accusation that the strike was illegal.

“We have submitted the letter for this strike at the compound of the company but the authorities blocked us from reaching there,” she said.

Labour Ministry spokesman Heng Sour insinuated on his Facebook page that the strike had the signs of “color revolution”, an inflammatory accusation used by the government to crack down on dissent. Sour claimed the presence of pregnant NagaWorld workers at the strike was a political tactic.

Over the weekend, a fake news post on Facebook claiming the strike was organized by foreigners in Phnom Penh gained momentum when it was picked up by the government-aligned outlet FreshNews. The Facebook post was deleted by Monday, but in a Sunday post of his own Sour seemed to be encouraging investigation of its accusations.

“With or without the presence of pregnant women, the Ministry of Labor and relevant authorities will continue to resolve this dispute in accordance with the law procedures,” he wrote.

“Following the claim of foreigners who are waiting to burn down our house will bring disaster back to ourselves. Personally, I fully support any legal action from authorities in cases having evidence showing that there are foreigners behind, or when reason and professionalism reach a dead-end.”

Sour also wrote in his Sunday Facebook post that officials have been working to solve the conflict within the ministry and the national arbitration council.

“In this world there is no law stating  that staff should work at any company for life, or prohibiting any company from cutting staff numbers,” he wrote.

In cases when economic or internal changes make layoffs necessary, Sour wrote, any downsizing should follow legal procedures such as providing prior notice, as well as paying compensation and other benefits based on the law.

He said the ministry will continue to explain how to calculate compensation if stakeholders still have questions. But the ministry does not have the authority to “prohibit companies from lay off staff for any justified reason”, Sour wrote.

Touch Kosal, president of the Cambodia Tourism Workers’ Union Federation (CTWUF), said the strike is legal under the labor law, which states that strikes are acceptable once staff have tried all other options.

“First they used all forms of procedure, starting from negotiation at the company level and the labor department until the case was sent to the arbitration council,” he said.

Kosal believed NagaWorld management had tried to ignore the case and was not willing to seek a solution for staff. He pointed to the layoff of four key LRSU leaders as undermining the value of Labour Ministry recognition, noting that such leaders are supposed to be officially protected.

“[What happens] when the ministry forms a union and the company can still dissolve it? I think the ministry must force the company to negotiate, because if the company is not willing to resolve this, there is no solution,” he said. 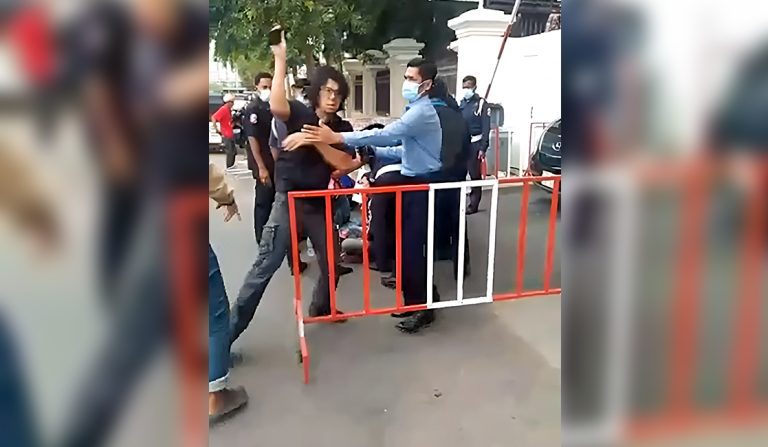 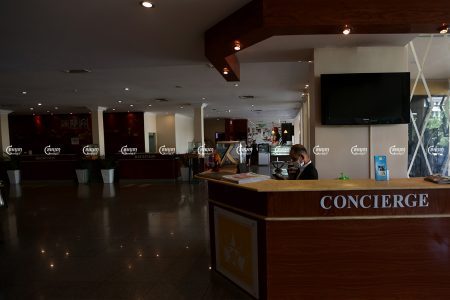