A group of United Nations rights rapporteurs on Monday called for the Cambodian government to stop the “systemic detention” of activists and human rights defenders, a reference to a slew of arrests following the jailing of prominent unionist Rong Chhun.

Mary Lawlor, the U.N. special rapporteur on the situation of human rights defenders, released a statement on Monday, which was endorsed by four other rights experts, including Rhona Smith, who is the rapporteur for human rights in Cambodia.

Lawlor said she had reviewed evidence that activists were being prevented from assembling peacefully, and that efforts to advocate for the release of Rong Chhun had only resulted in more arrests.

“I am increasingly concerned by the circular pattern of detaining them for advocating against the detention of or violations against fellow defenders. This cycle must end,” Lawlor said in the statement.

In late July, Rong Chhun was arrested for alleged incitement for comments he made about the contentious Cambodia-Vietnam border demarcation issue. Following his arrest, youth and environment activists protested the unionist’s arrest in Phnom Penh, with authorities detaining 12 of them, according to the statement.

“There seems to be no limit to who the authorities will target, making their actions in recent months appear as a concerted attempt to erode civic space and stifle the work of human rights defenders,” said Lawlor.

The arrests include Khmer Thavrak member Hun Vannak, Mother Nature activists Long Kunthea, Phuon Keoreaksmey, and Thon Ratha and activist monk Koet Saray. Most of these activists were arrested for protests in the capital or for announcing a march to Prime Minister Hun Sen’s home to ask for his intervention in the case.

Rhona Smith, who is the special rapporteur for human rights in Cambodia, said the arrests and persecution of human rights defenders could have a lasting effect on the country’s civil society.

“I am seriously concerned that the impact on civil society will be lasting and urge the authorities to end this harmful approach to human rights defenders and facilitate freedom of expression and assembly, for the benefit of all members of society in Cambodia,” Smith said in the statement.

The Cambodian government has defended the arrest of Rong Chhun and called the protests by the activists and rights defenders as an attempt to incite citizens.

Khieu Sopheak, spokesperson at the Interior Ministry, said the statement would not have any impact on the sovereignty and independence of Cambodia.

“We are also bored repeatedly telling the U.N. that their [human rights] concerns are about law enforcement,” he said.

Justice Ministry spokesperson Chin Malin accused the U.N. experts of using information from those who want to “target, criticize and oppose the government,” claiming that the actual situation in the country was quite the contrary.

“In Cambodia, [we] do not classify you as an activist or not an activist; if you committed a felony, you will face the law,” he said.

Malin also defended the law enforcement measures taken against those people who have protested in the last few months. Lawlor’s statement criticized the use of excessive force against human rights defenders, many of whom were women – a reference to the frequent use of violent measures against CNRP-linked families calling for the release of their relatives.

Soeng Senkaruna, senior investigator at rights group ADHOCs, said it was disappointing to see the government just deny all the accusations made by the U.N. rapporteurs, adding that if corrective measures were taken it would only benefit the country.

“The government should find a resolution rather than this cycle of rejection of [issues] raised by the United Nations,” Senkaruna said. 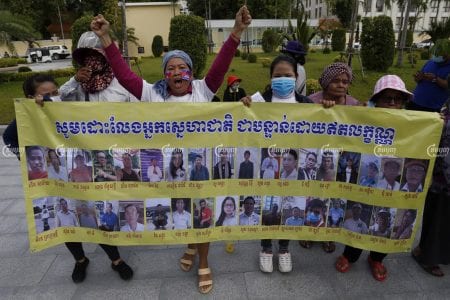