Vaccine budget increases to at least $100 million, WHO to guide acquisition

Prime Minister Hun Sen said the government would allocate at least $100 million towards acquiring a COVID-19 vaccine, but was waiting for the WHO to approve a vaccine.

In a marathon four-hour address, Hun Sen said Cambodia would start ordering doses of the vaccine once they are approved by the WHO, in addition to the 20 percent doses they will get from the organization’s COVAX vaccine development project. The COVAX doses would suffice for 3.2 million people, but the government was looking to vaccinate at least 80 percent of the population, around 13 million.

“I would like to clarify that Cambodia is one of the COVAX members, which is supported by the United Nations’ WHO. We will follow the COVAX mechanism and will not buy any vaccine which is not recognized by the WHO,” he said.

“However, I cannot answer when the vaccine will arrive because Cambodia will only buy vaccines recognized by WHO; we will not use the people to test the vaccine,” said Hun Sen.

Last week, the prime minister kicked off a donation drive to solicit funds for vaccine acquisition. The fundraising charge was led by Cambodian elites and influential tycoons including Kith Meng, Sok Kong, Lao Meng Khin and Choeung Sopheap, as well as the King and Queen Mother.

Hun Sen said the government had collected $48 million so far from public donations, and that $26 million had already been transferred to the Health Ministry’s budget.

Ailan Li, the World Health Organization’s representative to Cambodia, said last week that a COVAX Global Vaccine Facility required either approval by a stringent regulatory authority or WHO Emergency Use Authorization or prequalification.

“We expect vaccines to begin arriving in countries sometime in 2021. We hope a vaccine will be available in Cambodia early or mid-next year, but the exact timing is not certain,” she said.

Cambodia has recorded 41 cases in the recent community transmission cluster, labelled the “November 18 event,” taking its total case count to 362, with 43 active cases as of Wednesday.

Hun Sen said the government had managed to control the community transmission but was hesitant to say the “November 28 event” had ended, adding that there were people who had not been tested or had not quarantined adequately.

“We ask the Ministry of Health to continue [monitoring] for another 14 days to find cases. We do this to ensure that the community transmission will be completely ended by at least 20 January, 2021,” he said.

The government has delayed the Grade 12 national examination to mid-January, with Hun Sen recommending that all students be allowed to pass the examination automatically.

He also admitted the release of photographs and private patient information affected their rights but that the government was in a “dark time” with the community transmission incident and would not release these details anymore.

Pa Chanroeun, president of the Cambodian Institute for Democracy, said the government had succeeded in controlling the current cluster of cases with some measure of calm.

“We have just seen the situation was calm but we have not yet confident about whether there will be an outbreak in the future,” he said. “However, we need to be vigilant to prevent infection from COVID-19,” Chanroeun said.

He said a government taskforce should clearly evaluate the merits of a vaccine and its efficacy on target groups, while making this data accessible and transparent.

Chak Sopheap executive director at the Cambodian Center for Human Rights, said the government seemed to be deviating a little from WHO vaccination guidelines to first inoculate health workers and the elderly. The government was adding security personnel to the list of vaccine recipients, she added.

“We encourage the RGC to abide by the WHO’s existing and future guidance when implementing its COVID-19 response measures and ensure that distribution of the vaccine is organized in an equitable and non-discriminatory manner, prioritizing vulnerable or immuno-compromised members of society,” Sopheap said.

The government must ensure there were no barriers to accessing the vaccine, she said, that could prevent certain marginalized populations from obtaining it.

“We believe deferring to experts is a sound decision and that it would ensure that a safe and effective vaccine is used in our country,” she said.

Uk Chhayavy, president of the Cambodian Independent Teacher Association, was disappointed with the government’s decision to cancel the national exams, saying it would affect the quality of the educational process.

“I think that educational quality will not be better because we have passed [students] without an examination, if we compare to previous years,” she said.

She said the government could conduct the examination at each high school, ensuring social distancing guidelines of the Health Ministry and WHO.

Dy Khamboly, a spokesperson at the Ministry of Education, declined to comment because ministry officials had not met to discuss the issue. 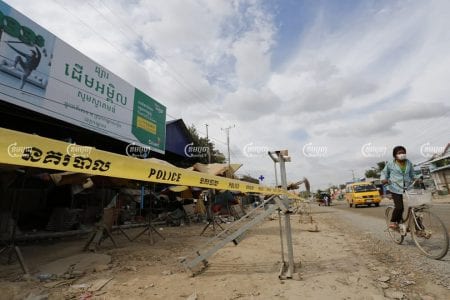 Gov’t still undecided on vaccine acquisition, as cluster surveillance spreads to the provinces