In mid-October, a group of 10 students and monks from Battambang were turned away from the Preah Roka community forest in Preah Vihear province, and told it was a restricted area. Similar incidents were reported by at least two student groups trying to enter Prey Lang forest in Kampong Thom province.

Hok Kimleang, a 23-year-old electrical student, said the Battambang group arrived on October 15 for a four day trip to monitor illegal logging in the forest.

“There has been a lot of crime in the community related to deforestation and there has been [illegal logging] transportation day and night, but at the same time the authorities seem to be ignoring this, so the youths have decided to go,” she said.

Before arriving, she said, their activities were monitored by the authorities day and night. When the group arrived at the forest, they were stopped and told they didn’t have permission to enter.

“For me, it is very frustrating when the authorities do not cooperate and our young people have a spirit of protection. Despite the threats and arrests of forest protection activists, we continue to be patriotic in protecting the forest,” she added.

Dap Sokhy, 34, a member of the Kuoy indigenous community, said he accompanied the group to the community forest, only to be stopped by environmental authorities saying groups larger than three people needed permission from the Ministry of Environment to enter.

“In my opinion, the ban by the authorities is an illegal act that does not allow people and youth groups to visit the forest, because the forest belongs to the community and every citizen has the right to participate in preventing [illegal] activities,” he said.

Sokhy said illegal logging had greatly increased during the pandemic, with timber transports taking place day and night — which was why they wanted the students to document the crimes.

Director of the Preah Vihear Provincial Department of Environment, Chan Socheat, said that the group was turned away because it wasn’t appropriate to have monks camping in the forest. He added that the authorities didn’t prohibit the group from entering, but said they needed permission from their schools.

“They are students, they came to enter the forest, so I asked their school to make a letter so that we can have some guidelines, but if you come alone and there are also monks and no other documents, is it right?” he said.

He said the areas are protected and that authorities have the right to enforce such laws, though he denied allegations that illegal logging had been taking place in the community forest.

The incident mirrors at least two others that took place in September and in February, with dozens of youth environmentalists turned away from community forests in Kampong Thom province’s Sandan district, after hoping to learn about deforestation and how locals patrol and protect the forest.

Dorn Sopheang, 22, said he had previously entered the O’das Skor community forest on such trips on several occasions but in February, were stopped by local authorities and environmental rangers from entering the Prey Long forest.  They were later allowed in after requesting special permission.

“We intended to enter the Prey Lang area, but the authorities banned us and said they required a permit,” he said.

Cheat Chan Rainsy, 18, said his group was turned away in late September by police, park rangers, and a deputy provincial governor, after seeking to enter the community forests of Kbal Daun Kry and O’das Skor.

“For me as a youth, I really wonder because the national policy… encourages young people to participate in environmental protection and the [constitution protects] the right to participate in various social activities,” Chan Rainsy said.

He said it was a pity that the authorities banned young people from camping in the community forest, noting that they had the same goal as the rangers of protecting the forest.

Sarun Rongsai, 22, a fourth-year ecology student, who was in the same group, said that the response was particularly heavy handed, with more than 20 security officers arriving to turn them away.

“The purpose of our visit is to learn from the community and walk in the forest, especially to breathe the fresh air,” she said. “This shows that it is a threat to the youth, who are only students and there were only 17 of them.”

Heap Theang, chief of the O’das Skor community forest, said that a group of youth were blocked in February, and then blocked again in September — with many more authorities showing up to turn them away.

“In my opinion the arrival of young people does not cause a problem, they’re just walking in the forest, because this forest is our forest, and if they help protect it, it will be even better,” he said.

Environmental activist Heng Sros said that such entry restrictions represented a violation of the rights and freedoms of young people who love and wish to protect natural resources.

“We see that the image that the authorities are making of them seems to be threatening, and this threat is not just now, it has been a long time in the activities of young people to prevent deforestation,” Sros said.

When the authorities try to prevent young people from entering the forest, he added, it is as if the authorities are trying to protect the perpetrators of deforestation.

In April, a report by the Global Initiative Against Transnational Organized Crime, accused the Cambodian government of overlooking, and at times actively protecting illegal logging groups driving severe deforestation in Prey Lang.

Kong Sophea, deputy governor of Sandan district, said the reason the rangers barred students from visiting Prey Lang and the community forests was because they had not applied for a permit from the provincial environment department.

“As district authorities, we came down to facilitate and we also support those who came to study the biodiversity in the forest area, and asked them to apply for a permit from the Department of Environment so that the [environmental protection] forces can join them,” he said.

“I also promised the students, next time if they come and submit a letter, I will join them. And if they want to ask or want to interview me, I can answer [their questions],” Sophea said.

Sophea insisted the permit requirement wasn’t new, noting that his office regularly issues passes to student groups coming to study in the forest.

Previously, he said, when the forest was under the auspices of the Department of Agriculture, people could enter and leave the forest freely, but after the Environment Department took control in 2016, they added entry restrictions in an effort to combat forest crimes.

Top Kakda, Kompong Thom provincial environment department director, declined to comment, while the Ministry of Environment’s spokesman Neth Peaktra could not be reached for comment. 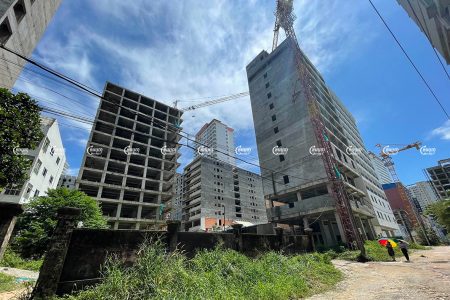