A bridge too far: Railway families reject relocation as threat of eviction mounts

About fifty meters from Techno Skybridge, hidden from the cars that drive across it, 25 families live alongside the railway track in a cobbled-together community of huts that they fear will soon be torn down.

Five months after being given one month to leave, the families – known as village 17 – have reached a dead end. Promises have been broken and negotiations with the government have stalled, after the families rejected offers to relocate to Kandal province.

“I cannot leave; my granddaughters will drop out of school if we move outside of Phnom Penh,” Iev Mach, a 61-year-old scavenger who has lived here since 1992, told CamboJA.

With no savings and a daily income of about 10,000 to 15,000 riel, relocating to Ang Snuol, about 30 km west of Phnom Penh, is logistically difficult and financially impossible, she said.

“Sometimes, I earn nothing. I am very worried; since they informed us, I cannot sleep at night,” she said, adding that authorities had warned her and others to keep quiet and wait for them to find a solution that never came.

But they wont stay silent much longer.

Located in Toul Kok district’s Boeng Kak I commune, the families of village 17 are just the latest to face forced eviction as a result of Phnom Penh’s ongoing development – this time for a 12-meter concrete road and drainage system either side of the railway.

More than 50 communities and a total of more than 40,000 people have been evicted from Phnom Penh since the 1980’s, often without proper compensation, according to land rights group Samahkum Teang Tnaut.

“Indebtedness, loss of livelihood, physical harm and lack of access to healthcare and education services are just some of the abuses which families have had to endure in their fight,” STT said in the 2020 report Eviction and Relocation.

While Village 17 is far from perfect, moving out of the city would jeopardize the ability of children to receive an education, said Mach’s granddaughter, Cheata, who attends a nearby school free of charge thanks to a charity.

“When I come home from school, I stay inside and rarely get outside because I am afraid,” she said, adding that there were drug users roaming the community. “However, I also do not want to move away from the city. I hope to live in a new place in the city that is better than this.”

A letter from the Toul Kok district office dated August 12, 2020, gave Community 17 one month to leave. Four months later, the pending eviction hangs over the heads of the families, who say they will not leave without a better offer, such as resettlement in Toul Kok or Russei Keo district.

After negotiations with local authorities stalled, they sent a letter calling for Phnom Penh Governor Khuong Sreng to intervene, and were invited to meet meet officials on January 14, the families said.

But on the morning of the meeting, local police and the commune chief paid them a visit, warning against joining the meeting.

“They threatened us with arrest; they said that if we go, we will be classed as opposition party and jailed,” said Kov Sarun, a representative for the families.

Local authorities implored the community to accept what was on offer, Sarun said, which, for some, amounted to a few square meters of land after a strip between the railway and their homes is cut for the road.

“What is the point of a title for two meters of land?” he said, adding that uprooting and moving to an area they are not familiar with was simply not an option.

“If we go there, it is like starting a new life, starting from zero in a new place with no infrastructure.”

The next option is to march to Prime Minister Hun Sen’s house to bring attention to their plight, he said, and threats from local authorities would not stop them.

While violence has become much less prevalent in the forced evictions of the urban poor, according to STT, associated trauma has not, particularly during the COVID-19 pandemic.

“The world is suffering because of the current pandemic and the poor people of Cambodia are some of the worst hit,” executive director Soeung Saran said in a statement accompanying last year’s report, calling for the government to cease all evictions during the pandemic.

“After the pandemic has ended, we ask the Government to respect the human rights of its people and to always provide consultation before evictions take place.”

As the people of village 17 weigh their options, they are likely to be joined by families currently living on the other side of the Techno Skybridge, where the new road is set to run straight through ten homes in Toek La’ak I commune.

While half of those families are resigned to moving to Ang Snuol, five continue to hold out, and could end up with nothing, said commune chief Pich Sokhoeun.

“They have asked for land in Russei Keo or Toul Kok district but this is impossible, there is no land left in these two districts for them,” he said, adding that there was no plans to restart negotiations.

“I don’t remember which case this is as we have thousands of letters submitted,” he said, adding that his office was dealing with multiple disputes surrounding developments of and around railways.

“We already developed concrete roads along some parts of the railway after we studied and solved the impacts and we continue to do so in other places.”

The government has for years been accused of approving development plans without properly considering the impacts on people – and this case is no different, said Am Sam Ath, deputy director of local rights group Licadho.

“Forced evictions are an abuse of the people’s right to live and also damage the image of the government,” he said, adding that such events were also detrimental to society as a whole.

“Forced evictions have a negative impact on children – they will drop out of school.”

For Hean Vutha, the threat of eviction is nothing new.

The 54-year-old was among thousands of people forcibly evicted from the Boeng Kak lake area in 2007 following years of protests and battles with authorities in one of Cambodia’s most notorious mass evictions.

After accepting $500 cash and a small shelter, he moved into Borey Santepheap II and began a business. When that failed, he bought for $10,000 a small house alongside the railway, where he hoped to live peacefully.

“Now I face eviction again,” he said, adding that he would be left with 3.5 meters after the land is cut to make way for the road development.

“I am asking for more acceptable compensation,” he said firmly, “and I will not move outside of Phnom Penh.” 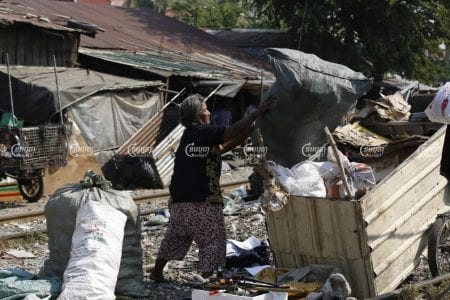