As Chinese FDI grows, so does Cambodia’s dependency on China, say experts

The Chinese Embassy in Phnom Penh announced a sharp increase in foreign direct investment to the county, which observers say is a reward for Cambodia’s loyalty to its closest ally.

The Chinese Embassy posted on its Facebook page last week that Chinese incoming investments had touched $860 million for the first 11 months of 2020, registering a 70 percent increase over the same period in 2019.

The embassy also listed high-profile investments and projects, such as the Sihanoukville-Phnom Penh Expressway, a new airport in Siem Reap city and the influx of Chinese businesses operating out of the country.

“The number of enterprises in the Sihanoukville Special Economic Zone has been steadily increasing and the volume of imports and exports has reached a record high,” the embassy said in the post.

Sok Chenda Sorphea, secretary general at the Council for the Development of Cambodia, and Meas Soksensan, a spokesperson for the Finance Ministry, could not be reached for comment on the latest Chinese investment figures.

A large amount of Chinese investments in the country has centered around the coastal city of Sihanoukville, and linked to the now-outlawed online gambling businesses. Investment has also been made into large infrastructure projects across the country.

Kheang Phearum, the Preah Sihanouk Provincial Hall spokesperson, said there were 71 Chinese projects in Sihanoukville, for a total of $17 billion in investments. He denied that these projects had brought with them an increase in land disputes.

“We have a clear mechanism to deal with the legal process in it. We must also distinguish between land disputes resulting from land titles and unregistered lands, and encroachment on state land which is not considered a land dispute. It is an illegal act,” he said.

Ear Sophal, a political scientist at Occidental College in Los Angeles, said the investments were small in contrast to the geopolitical benefits China gets from Cambodia’s camaraderie.

“FDI fills a gap that the lack of Cambodian resources cannot meet. It brings technology aside from finance. It builds infrastructure for Cambodians to use,” he said.

“However, it comes with strings attached as well as lacks environmental impact assessments, which for the Chinese can be done during the project itself.”

A number of investments in Sihanoukville are allegedly under the banner of China’s Belt and Road Initiative (BRI), an ambitious international infrastructure project linked to China’s geopolitical ambitions. There are no clear guidelines that spell out which investments are under the BRI project.

The Phnom Penh-Sihanoukville Expressway is a part of China’s BRI, costs nearly $2 billion, and has been 39 percent completed.

Anthony Galliano, group chief executive officer of Cambodian Investment Management Holding said that Cambodia had been rewarded for its geopolitical loyalty and solidarity with China, but given that China’s investments in the country was nearly 50 percent of all FDI to the Kingdom, it presented a huge risk and dependency.

“While there is no doubt of the substantial benefits to the country, the lack of FDI diversification is concerning, and frankly may actually alienate other potential foreign direct investment, given China’s dominance in this area,” he said. 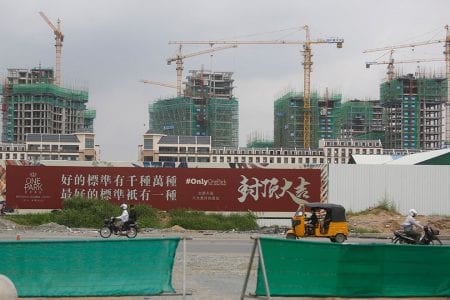