Despite the pandemic, there has been a boom in the development of high-end residential projects in Phnom Penh. The construction sector is one of the country’s main economic engines.

Hundreds of high-end residential projects are being developed by the Peng Huoth Group on 200 hectares of wetlands in the southeast of Phnom Penh. Prices range from $300,000 per unit for a shophouse to more than $4 million for a villa.

The company’s masterplan, seen by CamboJA, shows more than 60 high-end villas under construction. According to the company’s sale agency, the villas are worth between $2 and $4 million and most have been sold. Tep Kannitha, the sales manager of Peng Huoth Group, declined to comment.

Chrek Soknim, the president of the Cambodian Valuers and Estate Agents Association (CVEA), told CamboJA that the increase in value and size of the property sector is due to the country’s economic growth.

He said that while land prices remain unchanged and the sector is stable, house prices have continued to increase.

“Up to $3 million worth of luxury villas have been developed due to more demand for those who have a lot of money,” Soknim said, adding that there are also plans to develop villas costing over $5 million.

However, he said that property developers are only building these luxury properties based on the need of a limited group of customers, since such high-end properties contribute just below 15 percent of the total property market.

In fact, he added that properties below $100,000 make up more than 50 percent of the total property market. “The property market has more space to grow as the prices remain affordable,” at least by a rate of 50 percent compared to current prices, he said.

On May 11, Prime Minister Hun Sen praised the economic development of Cambodia, including the real estate sector, during a meeting with his Cambodian American supporters in the United States. He said that housing prices in Cambodia have now reached over $2 million.

“I have asked about home prices in the United States and the prices are cheaper than in Cambodia. In Cambodia, some houses are worth $1 million to $2 million,” he said.

The Cambodian government provides tax exemptions for those buying homes valued below $70,000. “We encourage [companies] to develop affordable housing so that low- and middle-income earners can afford them,” the prime minister said.

The report also shows that from 2000 to 2021, Cambodian authorities approved the construction of 57,590 projects in total across the country.

Also according to the World Bank, the growth in the construction and real estate sectors has pushed up the country’s domestic credit growth, which is a key risk to Cambodia’s financial stability.

“Although the demand for high-priced housing is increasing, it is still limited,” he said. “Some developers will not build multimillion-dollar homes until they receive orders from customers.”

He said that most low- and middle-income home buyers borrow money from banks to buy properties, in payment installments over up to 20 years.

According to a study by the Global Initiative Against Transnational Organized Crime, Sihanoukville “has been transformed through substantial Chinese investment into an enclave of Chinese-run casinos, restaurants, high-rise office buildings and power plants, and is becoming increasingly established as an illicit economic hub”. 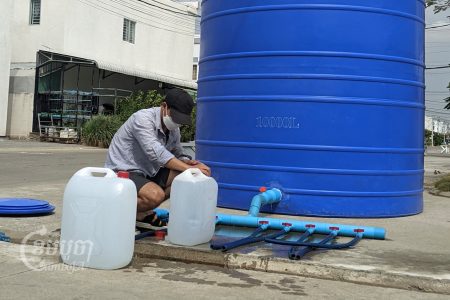