Phnom Penh authorities on Monday started to demolish a building in the controversial Borey Keila neighborhood as 13 residents were detained in the Prampi Makara district office.

City Hall and district officials refused to allow human rights officers and journalists to monitor the demolition of the dilapidated building and nearby shacks.

Deputy Phnom Penh governor Mean Chanyada and City Hall spokesman Met Measpheakdey inspected the site on Tuesday, with Chanyada ordering authorities to bar all observers from the area, without explanation.

However, a district security guard told CamboJA that four excavators had been used to destroy the old building.

Sar Sorn, a representative of the Borei Keila community, said on Monday that City Hall had invited 12 families to the Prampi Makara district office to find the solution for them.

“All of them were brought to district office to solve the problem but until around 5 pm, they were not allow go home,” Sorn said. She had also gone with them but was allowed come back earlier, she said.

City Hall officials told the residents there would be compensation for only 10 of the families, Sorn said.

Out of seven families Sorn had protested together with, four accepted compensation of a 5-by-4-meter house in Prek Phnov district’s Kok Roka commune, she said.

“I decided to receive this solution because I think it will be very hard to get another solution in the future,” she said.

Sorn added that on Sunday district authorities had arrested five residents of the Borei Keila community and sent them to the Prey Speu rehabilitation center in Dangkao district.

“I request to the City Hall: Please provide a resolution for them and please do not arrest them because they have small children to take care of,” she said.

Nhem Sreynith, one of the 13 land activists who were detained at Prampi Makara district office, said over the phone that City Hall authorities had invited them to the district office early in the morning.

“We were detained from 6:40 a.m. until after 5 p.m. at district office, and they did not solve the compensation [issue] for us,” Sreynith said. “I just want a house to live in with my husband and children because we do not have the money to buy a house.”

Sreynith said that among the 13 people were 12 women and a man with mental illness.

“Please release us and find a solution for us because we are very poor,” Sreynith said.

Those villagers were among hundreds of families who were forcefully evicted in January 2012 to make way for a large-scale construction project overseen by Phanimex, a development company owned by prominent tycoon Suy Sophan.

While the rest have since either accepted on-site housing compensation or relocated to the outskirts with cash, the families held out, rejecting the last offer of 8 million riel (about $2,000) and a 20 square-meter flat from the municipal hall.

In 2003, tycoon Suy Sophan’s Phanimex development company was granted land by the government to develop the Borei Keila community.

At the time, she agreed to build 10 buildings for 1,776 families, but her company only built eight and forced other residents to move to Kandal province’s Ponhea Leu district.

As of today, residents still live in old buildings and others are scattered near a rubbish dump in the community. Many of them continue to rally for compensation.

Chanyada, the deputy governor, declined to comment on Monday, while City Hall spokesman Met Measpheakdey could not be reached for comment.

Phnom Penh governor Khuong Sreng said by phone that City Hall authorities had only demolished one old building that was already occupied by a private company.

“There are only four to five families that are related to this case, but we’ve found solutions for them already,” Sreng said.

“The City Hall provided those families with a house each in Andong village in Prek Phnov district’s Kok Roka commune,” Sreng said.

Sreng said he had not received any information about the villagers detained in the district office.

“I did not order them to arrest any villagers,” Sreng said.

Prampi Makara district governor Lim Sophea could not be reached for comment.

Soeng Senkaruna, spokesman of human right group Adhoc, said he had not received clear information about the demolition.

“If they had nothing to hide, why didn’t they allow NGO activists and journalists to monitor there?” Senkaruna said.

“We will continue to observe this case and I am not sure yet whether villagers were arrested or not,” Senkaruna said. “Please … provide an appropriate solution for them and please do not hurt them.” 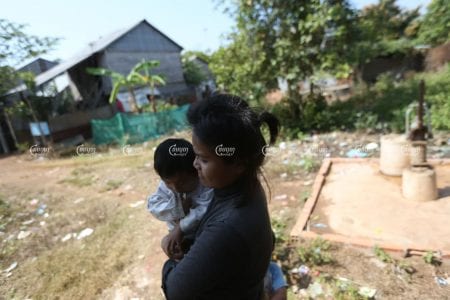