Late last year, Chey Sopheak’s two-year-old daughter fell ill. Struggling to scrape together enough money for the medical fees, Sopheak, 24, sold her hair for $20 — the third time she had done so in recent years.

It has been almost a decade since Sopheak and hundreds of her neighbors were violently evicted from Phnom Penh’s Borei Keila neighborhood and the intervening years have been difficult. Sopheak and her four children live off the $50 her husband, a construction worker sends each month. She washes clothes for neighbors. She depends on food from NGOs. On January 3, 2012, workers for the developer Phanimex destroyed hundreds of homes, crushing them to the ground before residents could grab their belongings. Police stood by, and clashed with residents who fought back — using tear gas and live ammunition.

Memories of that morning still haunt her.

“I was young, 15 years old, and was alone at home. I remember that my house was destroyed and if I did run away, I could be killed,” she said. “I feel hurt, I can hardly speak when reminded of 10 years back. They were cruel.”

Pumping water from a well near the bamboo grove at the edge of the village, 29-year old Heak Lida said there is no work to be had nearby. Lida has five children, the youngest just nine months old, and has been married since she was 14. Her husband, like many of the men in the village, works as a construction worker in Phnom Penh.

Lida lives in a 24-square-meter wood hut, built on the land distributed by Phanimex to those evicted from Borei Keila. Located in the heart of Phnom Penh, their Borei Keila homes allowed for ample opportunities for work and school. In Sras Por, it is almost impossible to earn money.

On the weekends, Lida sells flowers to visiting tourists at Phnom Oudong resort, located about 1.5 kilometers away from the village.

“I could earn just a little money to buy food. But since I gave birth, I stay at home taking care of my baby. People here lack food to eat,” she said.

In Sras Por, the Borei Keila families have become deeply dependent on charities.

“Last month, STT and LICADHO donated 25 kilograms of rice and some medicine, but now it’s almost run out. We always receive food donation from organizations.” Without such support, they could not survive.

Accessing water, too, remains a challenge. There is a well, but it has high levels of lime and can only be used for washing clothes, dishes, and bathing. For drinking water, residents pay 20,000 riel per tank. During the COVID-19 pandemic, families such as Sopheak’s and Lida’s have also received an additional $30 each month of government support. But it’s far from enough to get by on.

In 2003, the government granted Phanimex – owned by well-connected Cambodian businesswoman Suy Sophan — development rights to Borei Keila under a “land-sharing arrangement” to develop part of the area for commercial purposes.

Phanimex was obligated to build 10 apartment buildings on two hectares of land for the residents already living there in return for obtaining ownership of an additional 2.6 hectares for commercial development.

In April 2010, Phanimex unilaterally reneged on the agreement, however — with the approval of the government — and only constructed eight buildings. That left 300 Borei Keila families excluded from the original agreement.

Borei Keila was catapulted into wider public consciousness when the remaining families were violently evicted from their homes in January 2012. In exchange for the extremely valuable city property they occupied, residents were given small payouts, or scanty plots of land in distantly located, poorly serviced relocation sites.

On most days, Sras Por village appears to be filled only with old women and children — the young adults are off working in Phnom Penh.

Ieng Moeun, 62, eats lunch with her three grandsons on an old wooden bed in front of a small cottage. Moeun and her children were forcibly evicted from the center of Phnom Penh and daily life remains a struggle.

Moeun’s three children and son-in-law work as rubbish collectors at Orussei Market. They send home 50,000 riel ($12.5) every two weeks and visit when the market is closed for holidays. For the last four years, her grandchildren have been supported by an NGO that provides school materials and clothes.

“We need rice rather than money,” she said.

As a reporter and a photographer made their way through the village, a man who residents said was the community chief stopped them, saying they needed to ask permission before entering the community and talking to villagers. Five minutes later, the vice-chief of the village and five village security guards came at the scene and asked them to leave.

Village Chief Vong Chhorn said families are doing better and pointed out they can access the electricity. But he admitted that water is still an issue.

“They don’t have clean water; they have to buy water from other sources in the area. They have a well, but the water cannot be drunk,” he said, adding that clean water has been connected to the village for two years so far but most people still cannot afford to access it.

Chhorn blamed the private company that supplies both electricity and water for failing to provide adequate services.

“The village authority has done the job to serve people in the village but the company that works with the government does not serve the people well. People blame me… but I cannot do anything beyond my capacity I am just a village chief,” he said.

CamboJA called Meth Measpeakdey, City Hall spokesperson, to ask if the municipality is aware of the situation of those who were evicted, but he could not be reached on numerous occasions. Commune chief Nheb Chan refused to comment.

“They are facing difficulties. If we look at their living standard for these 10 years, we see nothing notably changes. Now it seems like no one cares about them anymore,” he said.

Sam Ath highlighted the lack of infrastructure, making it hard for people to find jobs in the area.

“This is a lesson that the government needs to take care of those who will be relocated in the future,” he said. “It must be inclusive development, transparent, and sustainable.” 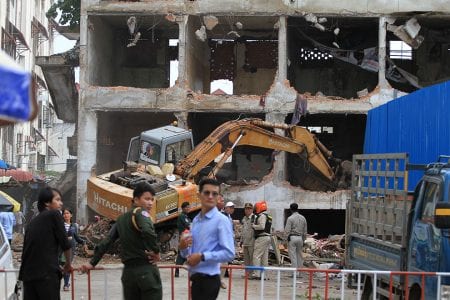