Cambodian farmers violently evicted more than a decade ago filed a petition in a US court this week to compel Coca-Cola to turn over evidence as part of an ongoing case against Thai sugar giant, Mitr Phol Sugar co.

Between 2008 and 2009, more than 700 families in 26 villages were forced to give up their land for a 9,400 hectare concession, according to a report from Inclusive Development International. To make way for the industrial sugarcane plantation, families were violently pushed from their land, with their homes and crops destroyed. In 2015, the Thai National Human Rights Commission found Mitr Phol responsible and ordered the company to remedy the situation. When no compensation was offered, the families sued the company in Thai courts in 2018.

Eang Vuthy, executive director of Equitable Cambodia, which is providing legal assistance for the victims, told CamboJA that the Thai court will start hearing the case against Mitr Phol in early 2022.

“In the process, [lawyers] need to ask the U.S court to help them obtain documents from Coca-Cola to support the case against Mitr Phol,” he said.

In 2013, after revealing that Mitr Phol was one of its top sugar providers, Coca-Cola announced it was auditing its supply chain amid a “zero tolerance” policy for land grabs. The case filed in the Northern District of Georgia asks for the beverage company to publicly disclose those findings.

“Some families have yet to receive their land back and are still struggling with their livelihoods,” said Vuthy.

Oddar Meanchey governor, Pen Kosal, told CamboJA that he does not know much about the issue.

However, he said that since the company left Cambodia and returned land to the state, the government had placed the land into social and economic land concessions, while allocating some for the forestry restoration area.

While some families have been granted some land, many are still struggling to recover and remain deeply impoverished.

Ko Phan told CamboJA that since her house and crops were destroyed to make room for the Mitr Phol plantation in 2008, the family has yet to receive any financial compensation or land from the government.

“My family has been living in poverty and some were forced to migrate to Thailand to make money,” she said.

Another victim, Tim Sarath, said that as the case with Mitr Phol continues, he hopes to receive compensation for crop damage. “I do not want much, I just want my land back,” he said.

In 2018, according to Phan and Sarath, some of the impacted families began returning to farm their former land, only to be sued by a company called Sann Heang — which is reported to have received an economic land concession from the government for agro-industry and forest restoration.

Adhoc’s Oddar Meanchey coordinator, Srey Naren, said that 10 families in Taman village have been accused of encroaching on state land and causing deforestation.

“They went back to farm on the land because they have not yet received compensation since they were displaced in 2009. The authorities should address the issue, rather than accusing them of encroaching on state land,” he said. 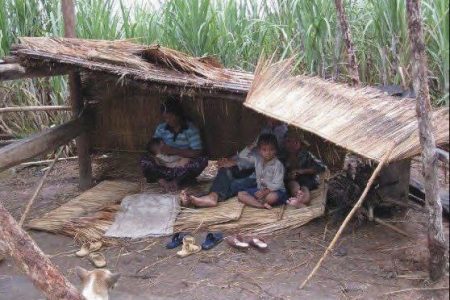