Candlelight party leadership say they are negotiating with the ruling CPP to seek the release of Candlelight’s vice president Thach Setha after he was arrested and detained in Prey Sar prison Monday for alleged bad checks issued in 2019.

“We consider [the arrest of Thach Setha] politically motivated rather than due to his personal conduct,” Candlelight co-vice president Son Chhay said at a press conference outside party headquarters in Phnom Penh on Tuesday.

Setha’s defense lawyer Sam Sokhong said the Phnom Penh municipal court violated court procedures and the rights of the accused by not allowing him to meet with and consult Setha when the court and police questioned Setha on Monday evening.

“I think that the procedure for questioning a client without being accompanied by a lawyer violated the court’s criminal code of procedure, especially interrogating the defendant at nighttime and after administrative hours,” Sokhong said.

On Monday, the court issued a statement saying it had issued a warrant for Setha’s arrest based on a complaint from Rin Chhay pawnshop in November 2019 that Setha had written a series of checks which could not be cashed. The court said Setha then failed to appear before the investigating judge on February 28 and June 22, 2021 in relation to five bad checks.

The court warrant cited Article 231 of the Law on Negotiable Instruments and Payment Transactions, related to financial transactions. Violations of the law carry a maximum penalty of a 10 million riel ($2,437) fine and a five year prison sentence.

CamboJA could not reach Rin Chhay owner HayVanrin for comment.

Rin Chhay pawnshop signed a contract in 2016 for a $33,400 loan to Setha, who secured the loan with land titles for five properties, totalling 373 square meters, as reported in the 2018 Fresh News article. The collateral included a land title belonging to the Khmer Kampuchea Krom Commnity to guarantee a portion of his personal loan. Setha was the president of the association at the time and remains in the role.

Checks issued to repay the loans from the pawn shop allegedly bounced, according to court documents published in Fresh News and Setha’s lawyer Sokhong. He could not clarify the discrepancy between complaints reportedly filed in 2019 and 2018 against Setha, saying he had not been able to fully review the court documents yet.

But when the court ordered a warrant for Setha’s arrest on Monday, the company had long since dropped the alleged fraud charges against Setha, his lawyer said. He added his client had already repaid the money to the plaintiff in the lawsuit.

“There was a case that happened but in the case of the person who filed a complaint related to fraud, the court has already acquitted the fraud charge,” Sokhong said.

The same court cannot prosecute someone for the same crime after they have been acquitted, said Sokhong, citing the legal principle of res judicata.

Political analyst Em Sovannara said he viewed the arrest of Setha as politically motivated because he had played an especially active role recently in strengthening Candlelight support inside the country and abroad.

“Although it seems like a personal issue, in this circumstance we cannot avoid suspicion from the public that this is related to political suppression,” Sovannara said, noting two other Candlelight leaders faced lawsuits from the ruling CPP.

“The checks were issued a long time ago, why didn’t they take legal action earlier and why did they just carry out [the arrest] now?” Sovannara said.

Sok Eysan, spokesperson for the ruling CPP, could not be reached for comment.

In December, Setha traveled to Japan to meet with representatives from the Constitutional Democratic party and the Liberal Democratic party. He also visited South Korea for one week in January to meet with migrant Cambodian workers and a Candlelight party working group. He also spoke with the governor of Nosan city, sharing his views about the erosion of democracy and human rights in Cambodia.

Candlelight’s Chhay said his party was still hoping they could resolve the matter and any political tensions with the ruling CPP, adding: “We will try all means to ensure that Thach Setha can return to his party job.” 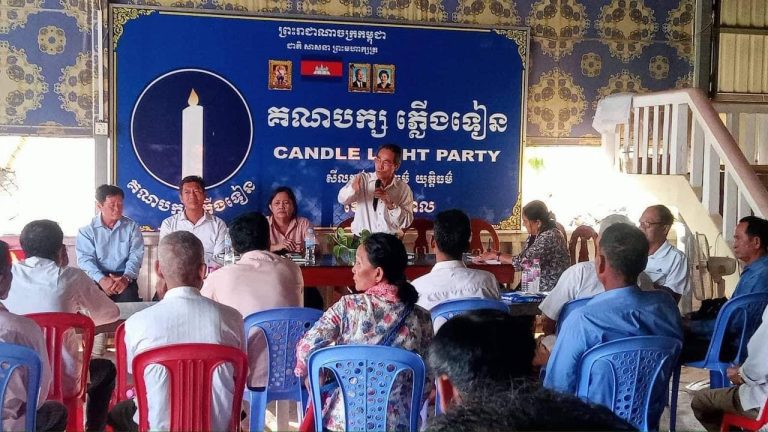